Junior Cert results out: Wait is over for 61,500 students 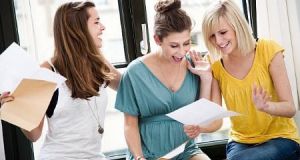 A total of 61,654 students who sat the Junior Cycle examinations in June can collect their results from their schools this morning and through the online examination results service on examinations.ie from 4pm. File photograph: Getty Images

More than 61,500 students will today become the first to receive their results in the new Junior Cycle format, which sees traditional grades such as As, Bs and Cs replaced with more descriptive grading terms.

A total of 61,654 students who sat the examinations in June can collect their results from their schools this morning and through the online examination results service on examinations.ie from 4pm.

The results show a fall in the number of those scoring the highest grades across most subjects.

English was the first subject to be rolled out under new Junior Cycle reforms and the results being presented for English this year are based on the new assessment and grading system.

Instead of traditional grades, such as As and Bs, students were graded using terms such as “merit”, “achievement” or “distinction”.

For example, a student who received between 90 and 100 per cent in the final written exam received a “distinction”, the highest honour awarded under the new system.

Scores of under 20 per cent were deemed to be “not graded”.

The numbers sitting the newly constituted Higher Level English exam rose in 2017, with a total of 48,235 sitting the examination.

There was an increase of 4.4 per cent in the number of students sitting Higher Level Irish in 2017, but as with the majority of other subjects, it recorded a drop (down 1 per cent) to 10.9 per cent in the rate of A grades awarded and a 2.5 per cent decrease in the honours awarded (81.8 per cent).

Other subjects include French, which saw a slight fall in the number of As awarded in Higher Level French to 10.2 per cent, from 10.5 per cent in 2016.

The results will be incorporated into the new Junior Cycle Profile of Achievement (JCPA). The JCPA will reward achievement across all areas of learning as is applicable to the student, including subjects, short courses and wellbeing.

Most teachers at voluntary secondary schools, under the instructions of the ASTI, have not to date engaged in any training to prepare them to teach and assess their students’ performance in English, or in the additional subjects which were introduced in September 2016 to incoming first-year students.

But following the suspension of all industrial action by the ASTI at their special convention in June, all second-level teachers will now engage over the coming months in a programme of retraining in their subject areas, which will be rolled out by the Department of Education throughout the country, to ensure effective delivery of Junior Cycle reform over the coming years.