Trinity in world’s top 100 universities for arts and humanities

Trinity ranked at 81st place, up from 88, in the global subject specific ranking 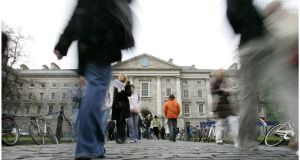 Trinity College Dublin has been ranked at 81st place in the world university rankings for arts and humanities subjects. Photograph: Dara Mac Dónaill

Trinity was the only Irish university to make the top one hundred, ranked at 81, up from 88th last year. Trinity was ranked in a group of 400 institutions globally in the arts and humanities fields.

Trinity was earlier this month ranked at 117 place in the overall Times Higher Education world university rankings for 2018, up 14 places from its ranking of 131 the previous year.

“The arts and humanities subject rankings employ the same rigorous and balanced range of 13 performance indicators used in the overall 2018 World University Rankings, but the methodology has been recalibrated to suit the individual fields,” said Mr Baty.

“All universities in the ranking have had to demonstrate excellence across teaching, research, knowledge transfer and international outlook so it is a great achievement to make the top 400.”

Stanford University in the United States was ranked at first place in the arts and humanities subject, ranking with Massachusetts Institute of Technology in second.

In the overall university rankings for 2018, NUIG, UCD and the Royal College of Surgeons are placed between 200-250, while UCC is placed between 351-400. Dublin City University and NUI Maynooth are both ranked in the 401-500 range.