Proportion of grant-holders far higher among regional institutes of technology 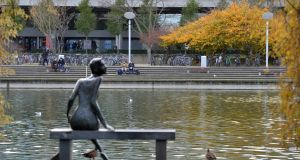 Up to three-quarters of students in some of the State’s colleges are reliant on grant support, according to new figures that highlight the scale of the class divide in Irish higher education.

School-leavers from more affluent backgrounds are much more likely to have places in universities offering high-points degrees.

By contrast, the proportion of students who rely on grants to pay for college is significantly higher in institutes of technology, especially in regional areas.

An Irish Times analysis of student enrolment and grant data for last year shows that UCD had the fewest grant-recipients (27 per cent), followed by Trinity College Dublin (28 per cent).

Letterkenny Institute of Technology had the highest concentration of grant-holders (74 per cent), followed by Athlone IT (73 per cent) and IT Carlow (71 per cent).

The scale of the social divide is likely to feed into new targets being developed by Minister for Education Richard Bruton which will oblige universities to meet targets to increase the numbers of students from less well-off backgrounds.

Grants are an important indicator of access to third-level across the social classes because because eligibility is based on an assessment of the income of students or their parents.

Household income eligibility thresholds range from about €40,000 upwards a year, depending on factors such as the number of dependant children.

While student numbers at third level have grown sharply in recent years, these figures indicate that better-off students still have a firm grip on top university places.

The analysis shows for the first time the proportion of grant-holders in the further education and training sector.

Just 40 per cent of students in this sector – who typically attend Post-Leaving Certificate courses – are in receipt of grants.

Careers experts say hefty charges of up to €1,000 for registration fees and course costs are not covered by the grant. This may be driving students away from the sector and towards institutes of technology.

Policymakers are increasingly trying to attract students back to further education and apprenticeships.

The number of students from disadvantaged backgrounds has risen from about 22 per cent in 2012 to about 26 per cent last year.

A breakdown of grant figures indicates the bulk of this growth is taking place in institutes of technology rather than universities.

Mr Bruton has signalled that universities could lose funding in future if they fail to meet targets to increase the proportion of students from disadvantaged backgrounds.

A new “system performance framework” is being developed which will set out goals for individual universities and colleges over the next five years. Improved access to college for disadvantaged groups will form part of this.

Despite the introduction of “free fees” 20 years ago, research indicates there has been no significant narrowing the participation gap across the social divide, especially in urban areas.

For example, latest figures show that about 99 per cent of school-leavers progressed on to higher education in the affluent Dublin 6 area compared to just 15 per cent in Dublin 17.

Both UCD and Trinity say they are investing significant sums in access programmes aimed at boosting numbers from under-represented groups, such as those with disabilities and mature students who have never been to college.