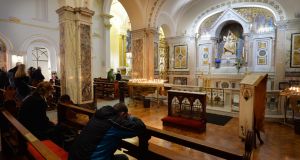 Of the 384 schools who responded to the Catholic Primary Schools Management Association survey, “only 17 schools refused enrolment for a reason relating to Baptism certificates”. Photograph: Alan Betson

Just 4.4 per cent of Catholic schools surveyed in the greater Dublin area have refused children admission over an absence of baptismal certificates, an Oireachtas committee has been told.

The Catholic Primary Schools Management Association (CPMSA) said its figures showed only 1.2 per cent of enrolments in greater Dublin were refused because of the so-called Baptism barrier.

The association’s general secretary Seamus Mulconry told the Oireachtas Joint Committee on Education and Skills that “in almost 95 per cent of our schools we take everyone who applies”.

There was, he said, “a growing issue of over-subscription found mainly in the greater Dublin area and the commuter belt, such as Meath and Kildare” where “we retain the right to prioritise members of our own faith”.

Believing it “unfortunate and regressive that the recent debate on the role of religion in admissions policy has been characterised by an almost complete lack of hard data”, he said the CPMSA had undertaken a survey of members in the greater Dublin area.

Survey forms were sent “to 456 schools, of which, to date, 384 schools have responded on questions of admission policy and Baptism certificates”.

Of the 384 schools who responded, “only 17 schools refused enrolment for a reason relating to Baptism certificates. This represents 4.4 per cent of the total. All of these 17 schools were over-subscribed with an average of 2.1 applications per enrolment place,” he said.

Many children from Catholic families “were also refused on grounds unrelated to Baptism certificates”, he said.

The survey results “ clearly demonstrate that the problem is lack of school places, rather than anything to do with an issue surrounding Baptism certificates”.

This was illustrated “starkly by these figures, and even more so when one looks at the number of applications to schools and the final numbers enrolled”, he said.

A total of 314 schools responded in full to the CPMSA survey, giving the total number of applications and the numbers that were newly enrolled in the current school year, he said.

That 7,750 figure also “captures the practice of many parents who make multiple applications to several schools, a practice driven by the shortage of school places”, he said.

He also believed it was significant “that the Edmund Rice Trust which operates 33 primary schools, almost all of which are Deis schools, in inner city or town locations and with a particular focus on special needs education, report no problems with over-subscription or issues with Baptism”.

The survey findings illustrated that the Equal Status Admissions Bill 2016 was “in fact, the wrong answer to the wrong question”, he said.

It was attempting “to cure a symptom without knowing the true nature of the underlying condition. Policy-making should be evidence-, not anecdote-driven and even then legislation should be the last option not the first.”