Minister to tackle Baptism barrier in lifetime of Government 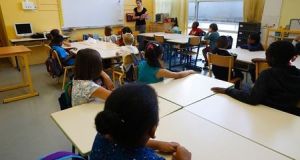 “We need to be accommodating at a time when 96 per cent of schools are denominational,” Minister for Education Richard Bruton said. Photograph: Getty Images

Plans to limit or remove the “Baptism barrier” from the education system will be implemented within the lifetime of the Government, Minister for Education Richard Bruton has said.

Under current laws, oversubscribed schools may discriminate against children based on their religion in their admission policies.

On Monday, Mr Bruton announced plans to either limit or remove the Baptism barrier from schools to ensure children from non-religious or minority faith backgrounds are not discriminated against.

He said there will be a consultation process of between 10 and 12 weeks and legislative proposals will be ready by next June.

“We have a confidence and supply agreement for three years. We will comfortably deal with this issue within that period,” Mr Bruton said.

While there has been extensive consultation with stakeholders on related issues in recent years, he defended the need for a fresh round of public submissions on the issue.

“It is not being put on the long finger... We have to recognise that Ireland has changed substantially. We need to be accommodating at a time when 96 per cent of schools are denominational,” Mr Bruton said.

Among the four options he proposed include allowing schools to favour children of their own religion only when those children live within the school’s catchment area, or when that school is their nearest one; a quota-based system; and an outright ban on using religion as a factor in admissions.

The proposals drew a broad welcome from a range of parents and religious groups, though there was concern at how proposals would impact on minority religions.

The Catholic Primary Schools Management Association, which runs about 90 per cent of the State’s publicly funded primary schools, queried the extent of the issue and insisted it was linked to shortages of school places.

Seamus Mulconry, the association’s general secretary, said: “The vast majority of Catholic schools are not oversubscribed and enrol all applicants. The issue mainly arises in areas of Dublin and in small pockets of the commuter belt surrounding the capital.”

He added: “Reforms to admissions policies will do nothing to alleviate the shortage of school places: only extra school places can achieve that.”

The Church of Ireland Board of Education said it was “vitally important” to safeguard the ability of religious minority schools to continue the key role they play in educational provision.

“The board is strongly of the view that considerations around changes to school admissions must reflect this existing practical reality.”

Campaign groups in favour of removing the Baptism barrier from education were broadly supportive of the plans, though some had reservations that they did not go far enough.

Michael Barron, director of the Equate campaign group, said he was happy there was a firm commitment to tackle the issue.

“There can be no doubt that momentum has been building for some time for reform of a system which allows schools to select students based on their religion,” he said.

Atheist Ireland said all the four options outlined were flawed and the plans could end up strengthening religious discrimination in Irish schools.

Michael Nugent, the group’s chair, said proposals to remove the Baptism barrier, in particular, could require parents or students to indicate support for the school’s religious ethos. “The only way to do that is through a State-funded network of secular schools that do not promote either religion or atheism, but that teach children about different religions and beliefs in an objective, critical and pluralistic manner,” he said.