Minister for Education Richard Bruton maintains the Dáil “has an appetite” to deal with the ‘baptism barrier’ issue and that there is a clear timetable for legislation. 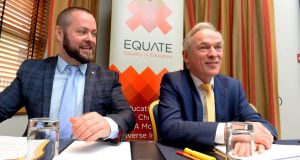 Minister for Education Richard Bruton maintains the Dáil “has an appetite” to deal with the ‘baptism barrier’ issue and that there is a clear timetable for legislation.

Mr Bruton on Monday announced plans to remove the baptism barrier from schools to ensure children from non-religious backgrounds are not discriminated against in school admissions policies.

“It is not being put on the long finger. The aim is to make Ireland have the best education service in Europe, ” he told Newstalk Breakfast.

“We have to recognise that Ireland has changed substantially. We need to be accommodating at a time when 96 per cent of schools are denominational,” he said.

He said he believes it is unfair that publicly funded religious schools are able to give preference to children of their own religion ahead of those of no religion who may live closer to the school.

Under current laws, schools may discriminate on the basis of religion in their admissions in cases where they are oversubscribed. However, this has become a highly contentious issue, given that 96 per cent of primary schools remain under the patronage of religious bodies.

Mr Bruton set out four possible approaches for dealing with the issue at primary level, in the first instance.

They include: A “catchment area” approach, prohibiting religious schools from giving preference to children of their own religion who live outside the catchment area ahead of non-religious children who live close by;

A quota system, which would allow a religious school set aside a certain number of places for children of its own religion;

A ban on religious schools using religion as a factor in admissions.

None of these measures is likely to be contained in schools admissions legislation currently being debated in the Dáil, according to sources.

Instead, Mr Bruton called for a public consultation on the implications of these proposals.

Paul Rowe, chief executive of Educate Together - which runs 90 schools, said there is very real discrimination in the education system. 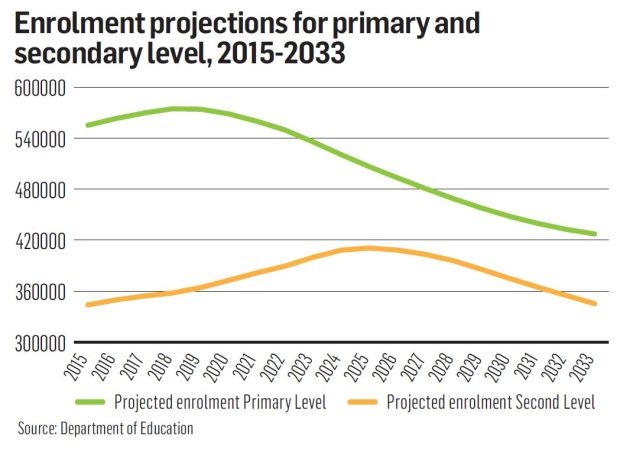 “Children of all religious, cultural and social backgrounds should be able to access all State-funded education on an equal basis - and we are delighted that the Government has come around to accepting this position,” he said.

The duration of the consultation process is so far unclear. This raises questions about whether any legislative change will take place within the lifetime of the Government.

Nevertheless, it is a significant move given that Fine Gael has now joined all the major parties in supporting plans to tackle the baptism barrier.

At an event on Monday on the issue organised by the campaign group Equate, Mr Bruton said the current system is “unfair” and parents should not feel pressured into baptising their children to secure school places.

He said he hoped there would be consultation, but that it should be limited to 10 to 12 weeks.

“We need to hear views. Ultimately we want to promote greater choice.”

He said the greatest problem may be posed for minority religions, but that this could be covered by the catchment rule.

On RTÉ’s Morning Ireland, the Minister said his instinct was to change the system. “We have to balance and deliver to the greatest number with the resources we have.

“This issue needs to be addressed. It is important to have admission policies that reflect a situation where one third of parents are marrying outside any denomination.”

One in four parents

The executive director of Equate welcomed the proposals.

Michael Barron told the Pat Kenny show on Newstalk that Equate would launch research that found one in four parents who had a child baptised did so to get them into a local school.

“Increasingly parents are saying we don’t want to do this any more. This is against their conscience. We’re already paying tax, so why should we have to baptise our child just to get them into our local State-funded school?”

On the same programme, Seamus Mulconry, general secretary of the Catholic Primary Schools Management Association, said he was “flabbergasted” at the figures quoted by Michael Barron.

“There is no requirement to have a child baptised to get into a Catholic school. In cases of oversubscription, a school may give preference to a Catholic child.

“The vast majority of oversubscribed schools are in Dublin and in affluent areas in Dublin. Nobody was refused entry down the country because their child was not baptised - because oversubscription is not happening in rural areas.”

Mr Mulchonry said oversubscription was “happening mainly in middle-class areas in Dublin where there is a growth in population”.

“If there is an adequate supply of school places we will take the child, if ‘Damien’ from ‘The Omen’ arrived into a Catholic school he would be accepted. Our tradition is one of inclusivity, and of accepting wherever we have spaces.

“There’s a little bit of the snowstorm in Donnybrook about this, if something happens in south county Dublin it’s a national issue, but the reality is schools down the country are not oversubscribed. The only place this comes into play is where there is oversubscription.

“The only reason a baptism cert is requested is to make it easier if the child wants to make first communion or confirmation.

“It is not an impediment, only in areas where there is oversubscription, generally due to increase in population.”

Mr Barron said the current system worked in the past, but no longer reflects the reality of modern society.

He said this is “absolutely not the end of denominational education”.

“The real issue that the Minister is trying to address is that parents are being forced to have their children baptised to get them into a local school.”