Catholic Church frets that religion ‘slipping off agenda’ in schools 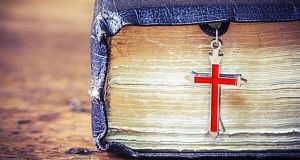 The Catholic Church has raised concerns in meetings with State education officials that religion is “slipping off the agenda” in their schools.

In a record of a meeting between the Education and Training Boards Ireland (ETBI) and Catholic Church representatives it was suggested that some community colleges were not spending enough time teaching religion.

This was despite agreements and deeds of trust which stipulate that these schools should spend up to two hours teaching pupils religion each week.

The comments are contained in records of a meeting in Maynooth dated February 16th, 2016, released under the Freedom of Information Act to the campaign group Atheist Ireland, and seen by The Irish Times.

The Education and Training Boards Ireland is the representative body for about one-in-three second level schools across the State which includes many former vocational and community schools.

The record states that Catholic Church representatives emphasised the need for principals to know and engage with religious education programmes in State schools.

It also states that the ETBI acknowledged the role that the church played as trustee partners in “defining the characteristic spirit” of designated colleges. This is a reference to about 55 community colleges where the church is a co-trustee along with the ETB. These were typically established from the 1970s onwards, often as a result of amalgamations.

Records show in most cases the local Bishop or clergy is represented on the board of management for these schools and is also represented on selection boards for any school appointment.

In deeds of trusts or model agreements for how these schools are run, church representatives also play a key role in employing State-funded school chaplains and religion teachers.

In a list of outcomes to the meeting, the ETBI and the church agreed to “heighten awareness” of the obligations facing community colleges relating to deeds of trust, such as the tuition time given to religion.

Other correspondence indicates local tension between Catholic Church representatives and ETB schools in different parts of the country.

In one case, a representative of the diocese of Cork and Ross objected to references in an ETB discussion document to a local community college – Coláiste Pobal Bheanntraí – as being “publicly managed”.

“This document does little to assuage the concerns of co-trustees and promote a model of partnership in education provision going into the future,” it states.

In response, the chief executive of Cork ETB said it was “fully committed” to the terms of its agreement with the diocese.

He added that its model agreements stated clearly that the ETB and the Bishop “shall determine the policy and philosophy of the college”.

In another case, a school chaplain at Coachford Community College in Cork raised “serious concerns” over the integrity of religion on the school curriculum.

He said there was an “erosion and loss” of religious education class time, and an apparent policy of assigning non-qualified teachers to teach religion on the basis of increasing their individual teaching hours.

“While most teachers have delivered RE [religious education] with goodwill, there have been occasions where the RE class regularly became a homework class or another subject class for a teacher who was assigned to them. This is an unacceptable practice which has weakened and undermined the subject of RE at school,” stated the chaplain.

In response, the ETB’s director of schools for Cork acknowledged there was a shortage of qualified religious education teachers at the school and pledged to seek to address this in the 2018-19 school year.

Other correspondence appears to reflect the influence of a Catholic or Christian ethos on sex education in some designated colleges.

In one, a policy on relationships and sex education states a guiding principle of the programme is that “marriage [is] the natural context” for sex and that “young people thus will be encouraged to value the gift of chastity, and human sexuality which is also gift”.