Investigation over ‘poaching’ from teachers’ union

New data shows Teachers’ Union of Ireland membership up by more than 1,000 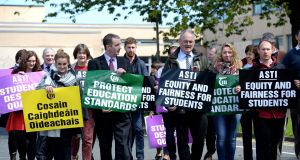 Members of the ASTI and TUI at a protest in 2015 at the Holy Child Community School, Sallynoggin, Co Dublin. Photograph: Cyril Byrne

A formal investigation has been launched into complaints by the Association of Secondary Teachers Ireland (ASTI) that up to 1,000 of its members were “poached” by the Teachers’ Union of Ireland (TUI).

It is understood that the complaint centres around an alleged breach of the rules of the Irish Congress of Trade Unions (Ictu) governing the movement of members between affiliated unions.

Official figures obtained by The Irish Times show there was a sharp drop in the number of ASTI members between January and July of last year based on the number of deductions of subscriptions taken at source from teachers’ salaries by the Department of Education.

During the same timeframe, the TUI’s membership swelled by more than 1,200 members.

The Irish Congress of Trade Unions has confirmed that it recently established a special committee under its disputes procedures to deal with a complaint that had been made by the ASTI.

The ASTI’s loss of membership occurred during its dispute with Government last year when members lost thousands of euro in frozen pay and loss of payment for supervision duties due to its “repudiation” of the Lansdowne Road pay deal.

The TUI, however, remained inside the pay deal and its members were unaffected by these financial penalties.

The dispute between the ASTI and TUI comes as both seek to present a united front in their campaigns for equal pay for new entrant teachers.

Both unions, along with the Irish National Teachers’ Organisation (INTO), are set to hold a joint demonstration outside the Dáil next week.

Department of Education salary data shows that at the beginning of January 2017 it made union subscription deductions at source on behalf of 14,901 ASTI members in secondary schools.

During the same period, TUI members whose union subscriptions were deducted at source rose from 1,793 to 2,993.

Again, over the same timeframe, the number of new ASTI subscriptions set up was 90. By contrast, equivalent number for the TUI was 1,281.

These figures relate to teachers being paid by the Department of Education and exclude, for example, State or Education and Training Board (ETB) schools.

The ASTI said it was co-operating with an Irish Congress of Trade Unions process in relation to this matter. “It would therefore be inappropriate to comment further,” an ASTI spokeswoman said.

These numbers alone do not provide evidence of “poaching”, given that many non-members in schools signed up to join the TUI to benefit from pay restoration.

A key part of Ictu’s investigation is likely to focus on what attempts the TUI made to establish whether new members had been members of the ASTI.

Some sources say there was a “don’t ask, don’t tell” policy in many schools. However, senior TUI sources insist the union went “out of its way” to ask teachers signing up whether they were members of another union.

If the Ictu investigation finds against the TUI, it could be forced to hand back significant numbers of members or else pay compensation to the ASTI.

The loss of members from the ASTI has stopped since June, when the union suspended its industrial action following a grassroots revolt against the leadership’s campaign strategy. Its members are now entitled to the same gains as the TUI.