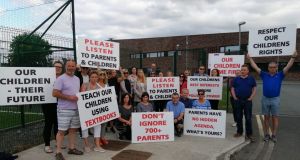 Dozens of parents who protested outside a meeting of the Ratoath College’s board of management on Wednesday evening.

A Co Meath secondary school is to maintain its controversial iPads-only policy for junior cycle students in the face of a vocal campaign by some parents to reverse it.

Ratoath College, a 1,000-pupil school which does not require junior-cycle students to purchase books, has requested parents to buy iPads for their children ahead of the new school year.

The school principal has previously defended the policy on the basis that the “21st-century skills” such as collaboration, creativity, critical thinking and problem-solving “cannot be taught from a textbook”.

However, dozens of parents who protested outside a meeting of the school’s board of management on Wednesday evening say their children’s education had been harmed by spending too much time on screens since the policy was introduced in recent years.

The “concerned parents” group says a petition signed by over 700 parents and guardians impacted by the policy states that they have no objection to the use of iPads if they are provided by the school, used under the supervision of teachers and retained in the school.

The group has requested booklists and says many are refusing to buy iPads for their children.

Following a recent meeting of Ratoath College’s board of management and members of Louth-Meath Education and Training Board, parents say they were informed that the school’s policy remains in place for the time being pending the outcome of an independent review.

A spokeswoman for concerned parents group said: “This is incredibly disappointing and deeply frustrating for the many parents who have supported the campaign to reintroduce books to the school for junior-cycle students.

“This has been a stressful time for us all and it’s quite shocking that a school board can have the power to make critical decisions that impact on children and parents without having to take their views into account.”

She added that parents were being “blatantly ignored” and had been denied a chance to have their say in the policy.

Some parents and teachers, however, are supportive of the school’s policy but have declined to comment publicly.

The school principal Oonagh Prendergast has previously said there was extensive consultation with parents ahead of the introduction of devices in 2014.

“We are now five years down the line and in that time these students have very successfully completed the junior cycle, in 2017 and 2018,” she said, in a recent statement.

A more recent consultation showed there was a “significant minority” of parents who were concerned about this change, Ms Prendergast said.

On foot of this, the school’s board is to review the digital learning policy in the school between now and December.

She also pointed out that books were still available in the classroom.

However, a spokesman said decisions on the use of devices were a matter for individual schools.

Among those parents opposed to the policy, some say the financial aspects of purchasing iPads are a major obstacle.

They say the school policy requires parents to purchase an iPad for their child through Wriggle, a designated service provider.