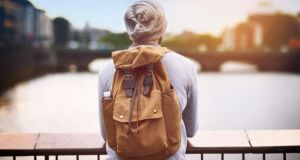 Fiachra O’Luain, co-founder of the English Language Student Union, said legislation was needed to outlaw the ‘no refund policies’ of some English language schools in Ireland. File photograph: Getty Images

Students who have paid for English languages classes but must return to online learning in light of the latest restrictions should be entitled to a partial refund on their fees, the Irish Council for International Students (ICOS) has said.

Speaking in light of Level 3 restrictions being in force in the capital until October 10th, Brian Hearne of the ICOS said the Government should require language schools to provide concessions to the thousands of foreign students unable to attend face-to-face classes.

The majority of online classes provided during the spring lockdown were “largely inadequate” while some language schools did not offer any online options to their students, said Mr Hearne.

“Unfortunately most schools are poorly placed to deliver online classes and don’t have the expertise to deliver them.”

The overall monitoring of these schools remains “far from satisfactory” with no real controls in place to ensure compliance, he said. ICOS research carried out during the summer found 76 per cent of schools surveyed were not compliant with basic regulations around online teaching, he added.

“The confidence in the English Language teaching sector is eroding, schools need to restore that confidence to attract students from abroad. If students must pay €3,000-€4,000 for face-to-face classes but then must do these online, this needs to be factored into the pricing.”

Fiachra O’Luain, co-founder of the English Language Student Union, said legislation was needed to outlaw the “no refund policies” of some English language schools in Ireland. Thousands of students have been “cast into a terrible limbo” and refunds should be granted to those who “did not get what they paid for”, he said, adding that students were not receiving online the standard of teaching expected when they signed up to their courses.

David Russell, chairman of the Progressive College Network, said language schools within the network had made “numerous upgrades, improvements” and held teacher training sessions at their own cost to improve online teaching resources for students. A survey carried out by the network in July found 89 per cent of its students were happy with their online learning experience.

Mr Russell said the plan was for all schools to return to face-to-face classes as soon as possible but that safety was the primary concern. He acknowledged that social distancing measures in classrooms were “proving challenging” but the sector was doing its best to maintain them. There have been no infections so far in English language schools, he said.

Independent College Dublin, which also offers English language courses to foreign students along with courses in business and law, said the safety and wellbeing of its students and staff was its “number one priority” and that “extensive measures” had been taken to comply with social distancing guidelines.

Its comments come after a student at the school contacted this newspaper with photographs and a video taken during a class which appeared to show dozens of students close together in a classroom with some wearing masks below their chin.

Pat Walsh, speaking for the college, said in a statement that where two metre distancing was not possible in classrooms, a minimum of one metre was applied and the wearing of face masks was compulsory. While students had recently been attending in person on an alternate weekly basis, he said the proportion of online classes would increase substantially in light of the new Dublin restrictions. Remote learning “proved effective” from the spring 2020 semester, he added.

Under the Level 3 restrictions, third level colleges in Dublin are required to move as much of their tuition online as possible.

Asked to comment on the lack of refund options available to language students and the quality of online teaching, a spokeswoman for the Department of Higher Education, Research, Innovation and Science said all schools eligible to recruit international students must have “established policies and procedures for the refund of fees to students in addition to a complaints procedure”.

The department reiterated its recommendation that English language school providers commit to a “voluntary moratorium” on recruitment pending the return to on-site classes.

On social distancing in classrooms, the spokeswoman said the department had “consistently highlighted the requirement for English language schools to meet public health requirements to safeguard students and staff” and would be “very concerned” by any evidence of non-compliance.