Life after you graduate: the best options for you in 2018 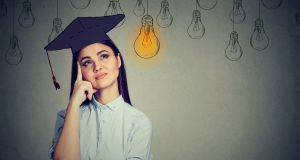 Graduates considering their career options are doing so in a rapidly improving economic situation. Unemployment continues to fall in the euro area where the seasonally-adjusted unemployment rate was measured at 8.7 per cent in December 2017, the lowest rate recorded in the euro area since January 2009.

The looming cloud of Brexit uncertainty is casting a shadow over the ongoing positive picture of employment opportunities but hopefully, the UK government will come to a determination soon as to what Brexit actually means to them. That will enable graduates to factor the outcome of their deliberations into their career planning processes.

Do postgraduate levels of education in most disciplines increase employability as well as salary?

Why would a graduate consider starting a postgraduate programme when employment prospects are looking so good in general?

International and local research shows that higher levels of education increase employability as well as salary. This trend is most evident in degree programmes which impart a specific skill set, where high CAO points, or equivalent qualification, are an entry requirement.

Conversely, many graduates from programmes where CAO points requirements are modest, find themselves competing in employment markets which in the recent past were the exclusive preserve of school leavers. Some of these students who secure modest academic outcomes, which preclude their advancement to postgraduate studies, or who drop out prior to the completion of their initial course choice, do not experience any income premium over and above school leavers.

How valid is the belief that most graduates always receive a postgraduate premium?

The belief that moving up the education ladder always improves your employability and salary prospects is based on what is known as the “graduate premium”.

This “premium” is the difference between the average earnings of a person with an undergraduate or postgraduate qualification, and an employee who finished their formal education following the completion of second level education, or at the end of their undergraduate studies.

The “premium” is often referred to as the “return on investment” in higher education.

As the EU and Irish economies strengthen and employment opportunities for undergraduates increase, the challenge for colleges to make the case that continuing onto post graduate level will lead directly to an improvement in their employability and salary over a lifetime is becoming more difficult.

Why are graduates in many disciplines turning away from postgraduate teacher training options?

When graduates who met the entry requirement for post primary teaching explored their postgraduate options back in 2012-13, they decided that despite the year of post graduate training required, the costs involved, the income forgone, and the poor employment prospects for their undergraduate qualification in the labour market, that applying to qualify as a registered teacher made sense in terms of a return on their investment in higher education.

There were three applicants for every available teacher training place, allowing colleges to select the most suitable candidates to train as teachers, and guaranteeing a supply of qualified teachers across the entire curriculum.

In 2018-19, current graduates of the same disciplines are facing a dramatically transformed range of choices. The economy has recovered enormously in the intervening six years, and their undergraduate degree, while still qualifying them to apply for teacher training, also will in many cases secure them a €30,000 plus initial salary in employment within the wider Irish/EU economy.

The qualification needed to become a recognised second level teacher has now doubled in length to two years with fees of €15,000 on average for the “Post Graduate Master’s in Education” (PME).

Current undergraduates considering this scenario, have decided in most cases that to forego their existing salary, pay fees of €15,000, and fund accommodation/living costs over that two-year period, makes no financial sense and offers no postgraduate premium, even if considered over lifetime’s earnings. Application numbers in the current years for the PME are at a level where there are fewer than one applications for every two places available, and this does not even take account of the suitability of those applicants for a career in teaching. The nonexistence of a postgraduate premium through teacher training is opening major teacher supply gaps across a wide range of Stem and language disciplines.

The challenge from postgraduate programmes from a booming economy and online education platforms.

The challenge to third level institutions in making the case for postgraduate studies has become progressively more difficult in the past few years and the percentage of undergraduates remaining on to pursue postgrad studies has decreased to 31 per cent from the high of 40 which pertained in the era immediately after the economic collapse of 2008/9.

The advent of online learning programmes specifically targeted at undergraduates has also created challenges to providers of traditional postgraduate programmes. These “micro credentials” or “Nano-degrees” are offered online by MOOC’s such as Alison. com, an Irish online education platform founded by Mike Ferric, Udacity founded by Sebastian Thrun in 2011, EdX which is a collaboration between MIT, Harvard and other leading universities.

Although promoted at opportunities for the masses worldwide to access “free” education in all areas of learning to the highest levels, the completion rates of programmes offered indicate that most users who successfully complete programmes already hold undergraduate degrees and rather than spend additional years studying at postgraduate level choose instead these micro courses, which allow them on the payment of several hundred euro to take online exams with the course providers to display their mastery of the subject matter the potential employer is seeking.

What is the case for continuing to postgraduate studies from the HEA survey of Graduate Outcomes for the class of 2016?

Reflecting the overall unemployment rates among youths under 25 as outlined above, a higher proportion of female postgraduates (82 per cent) than males (79 per cent) are in employment nine months after graduation.

Consistent with previous years, graduates in the Education field tend to fare best in terms of labour market outcomes. Many of these graduates emerge from undergraduate primary and post primary initial teacher education programmes, and a large proportion are employed in Ireland. However, despite some improvements, such graduates find it difficult to secure permanent positions in Irish schools, and choose instead to take up lucrative employment contracts in the Middle East.

This should meet demand for the domestic supply of ICT graduates and to continue making Ireland a very attractive location in the world for ICT skills and ability.

Lower rates of employment and lower earning potential are evident in the Arts and Humanities, and Natural Sciences, Mathematics, and Statistics, fields for level 8 graduates, but employment prospects improve considerably for graduates in these fields who obtain level 9 Master’s and 10 PhD qualifications, thus supporting the argument that postgraduate studies continue to offer long-term benefits.

Are postgraduate studies still worth it in the long term?

As exemplified by the turn away from the PME, graduates are highly sensitive to any changes in the benefits of pursuing postgraduate studies in specific sectors. However, from the results of the most recent analysis of graduate outcomes, notwithstanding the rapidly changing environment in which our third level institutions operate, it is clear that postgraduate studies remain very popular, and provides those that commit further years of study to it, with increased employment and salary prospects.

How about a career in international diplomacy?

A sample of courses from Ireland’s universities, ITs and smaller colleges