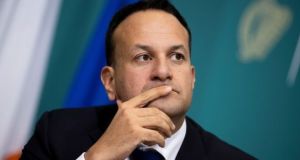 Tánaiste Leo Varadkar said crossing the Border between the Republic and Northern Ireland may not be advised even when travel restrictions lift in late December, sources at the Fine Gael parliamentary party meeting have said.

Mr Varadkar expressed concern during the private meeting about the prevalence of Covid-19 in Northern Ireland, where the number of cases has remained stubbornly high althought it has fallen over the past week.

Sources say he told TDs and Senators that travel across the Border may not be advised, where possible. He said the matter would be considered by Government.

He said it was inevitable that cases will rise after restrictions are lifted in December.

Mr Varadkar said “the way to infantilise people is not to tell them the truth”, adding that the virus spreads when people meet.

However, he also told the meeting that 2021 was a year to look forward to because people would be able to enjoy personal freedoms they may have taken for granted beforehand.

Mr Varadkar said the Level 3-type restrictions to be announced later in the week will resemble in place during the summer.

Meanwhile, a number of senior Fine Gael TDs called on Mr Varadkar to push for the reopening of pubs and implement a booking system for patrons when Level 5 Covid-19 restrictions ease from next week onwards.

Minister of State Patrick O’Donovan, John Paul Phelan and Joe Carey made the call at a parliamentary party meeting this evening.

Mr O’Donovan called for a booking system to be put in place for pubs and for groups to be given only one sitting a night. On this basis, he said, pubs should be allowed to reopen.

Mr Phelan argued that all hospitality facilities - whether they are bars, hotels or restaurants - should be allowed to reopen on the same basis with the same Covid-19 regulations in order to be fair to all businesses, it is understood.

Separately, Mr Varadkar is also understood to have told the meeting that the Mother and Baby Homes Commission Report will be published by Christmas.

The Fianna Fáil parliamentary party meeting, which also took place this evening, also heard calls for pubs and hospitality to be allowed to reopen along with other businesses.