School place shortages: ‘Children with special needs have to fight’ 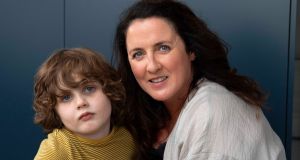 Róisín Kelly with her son, Arlo Sweeney: “You can hear the children in the playground from our house, that’s how close the school is.” Photograph: Damien Eagers

He is due to begin primary school in September, but there is no place for him.

The 700-pupil school says it cannot accommodate him, while he has been refused places in many other schools across the south Dublin area.

That is because Arlo has been diagnosed with autism and schools say they do not have the expertise to meet his needs.

“You can hear the children in the playground from our house, that’s how close the school is,” says his mother Róisín Kelly.

“But there is no special class in the school and there is nothing in the south Dublin area. The system is so discriminatory. If you have a child with additional needs, you are made to fight for everything.”

He is one of dozens of children with special or additional needs in south Dublin who do not have a school place for the coming school year.

Arlo has been assessed as requiring a special class, attached to a mainstream school, which typically has six students to one teacher and two special needs assistants.

While it is one of the most affluent areas of the State, campaigners say there is a “black hole” in the provision of special classes.

“The only explanation I can see is league tables. Or else there is an assumption that people in more affluent ares can privately educate their children. But that’s not an option – there are no special classes in private primary schools,” says Kelly.

“Ironically, Deis disadvantaged schools are more likely to have special classes, so people from wealthier areas end up taking many of those places.”

She hopes that the latest move by the Department of Education to compel schools to open up additional places will – eventually – provide a place for Arlo and many others like him.

“I try not to look too far into the future,” she says. “ I want him to have an education, to mix with his peers and to stay in his community. I want him to reach his potential, whatever that is. He just needs access to his basic human right.”