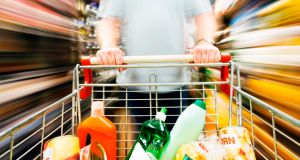 That wasn’t a soft breeze which stopped people in their tracks. It was a massive sigh of relief, breathed by over 30,000 apprehensive Leaving Cert students who sat ordinary level maths paper two on Monday morning.

Anxiety levels had been high following Friday’s maths paper, which was widely lambasted by students as unfair. Paper two received a more positive response from the vast majority of students on Twitter and a number of teachers.

John Brennan, a teacher at the Ballinteer Institute and at projectmaths.com, said students were generally happy with the ordinary level paper, but that it wasn’t particularly easy and some would have struggled to get off the ground. “For the first question, on permutations, not all students would have known what they were being asked. For question two, not all students would necessarily have known that what an ‘intercept’ is.”

Ordinary level students should at least be able to start every question, he said. “The difficulty is that if they’re unable to tackle the first part of the question, they can’t do the rest, and they lose marks. Because there are so many extra students are taking higher level maths, an increasing proportion of those who stay at ordinary level find maths a struggle.”

Brennan said the rest of the ordinary paper was generally fine. Eamonn Toland of TheMathsTutor.ie agreed that, overall, paper two was “significantly more straightforward than paper one”. He added it included “a lot of traditional elements, as opposed to being typically Project Maths, especially in Section B”.

Jean Kelly, a maths teacher at the Institute of Education, echoed this, saying students who found Friday’s ordinary level paper 1 demanding will be pleased and relieved with paper 2.

Response to the higher level paper was also generally positive. “Paper two was definitely more challenging than paper one - especially in the Contexts and Applications section,” said Toland. “The questions in Section A on concepts and skills were relatively easy and would not have presented too many difficulties to a well prepared student.

“Even the inferential statistics question, which has been a topic of much confusion for teachers and students, was straightforward. On the other hand section B on Contexts and Applications had some very tricky parts. Question 8 on probability started off fairly easily but the latter parts were very challenging. Some students may have been surprised to see sequences appearing here as that is supposed to be a ‘paper 1 topic’. However this is in line with the Project Maths philosophy of setting questions that draw from several supposedly different areas of the course.”

Aidan Roantree, senior maths tutor at the Institute of Education, said the higher level maths paper was a little more challenging that last Friday’s exam. He welcomes this, saying that it will have given stronger maths students a chance to shine.

A survey of 100 shoppers, randomly selected from a large number of Saturday supermarket shoppers, showed that the mean shopping spend was €90.45. The standard deviation of this sample was €20.73.

(a) Find a 95 per cent confidence interval for the mean amount spent in a supermarket on that Saturday.

(b) A supermarket has claimed that the mean amount spent by shoppers on a Saturday is €94. Based on the survey, test the supermarket’s claim using a 5 per cent level of significance. Clearly state your null hypothesis, your alternative hypothesis, and your conclusion.

(c) Find the p-value of the test you performed in part (b) above and explain what this value represents in the context of the question.