Is it time to fall out of love with universities? 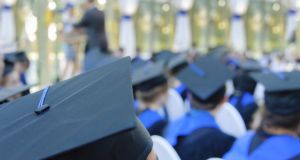 Universities are booming. In many countries close to half of young people now go on to tertiary education.

Others, including Ireland, are at that point or beyond: Ireland now sends approximately 60 per cent of its secondary school leavers to third level.

Everywhere, young people, parents, and governments agree that universities are the route to success, and the more of them the better. So a good news story?

For centuries, universities formed our elites, and were more or less irrelevant to most people’s lives.

Today their impact on all young people is huge - because if half of us go to university, what does that mean for the others?

Technical and vocational provision languishes and only a few countries still have strong apprenticeships. Meanwhile degrees, increasingly, fail to deliver on our hopes. We need to understand why.

National leaders believe that universities deliver growth. From Central Bank governors such as India’s Raghruam Rajan to US presidents such as Barack Obama, they laud and have lauded education as a sure-fire route to wealth and also equality.

The UK government’s 2017 higher education act was designed to make it much easier to set up new universities.

Why? Because, the government explained: “Doubling the number of universities per capita is associated with over 4 per cent higher future GDP per capita.” More universities, more equality, more growth.

Only it isn’t working.

The shock of 2008 obscured a longer-term problem: declining productivity growth. This didn’t start in 2008.

Instead, since the 1990s, growth in labour productivity per hour has been flat-lining or declining in all the big developed economies. This isn’t so obvious in Ireland because of its unusual economy.

The foreign, multi-national sector has big spikes and dips, including a productivity “spike” in 2014-15: and domestic sector productivity growth was very high in the early 2000s.

But the steady rise in real incomes ended some years before the crash, and Ireland’s domestic sector now looks a lot more like everyone else’s.

The 1990s were also when more and more graduates started to flood into the labour market. The fast-growing economies of earlier decades - like the Irish boom - were staffed by generations who had, for the most part, enjoyed full secondary schooling, but not degrees.

Extending university education was meant to deliver even faster growth. Evidently, it hasn’t.

Around the world, large numbers of jobs are now done by graduates that were being done perfectly well by non-graduates. We hear a lot about the ‘AI’ revolution, but nothing suggests that it will bring millions of new high-skill jobs.

What are growing and will grow are jobs serving other people: caring for the elderly, preparing food, cleaning.

We call these low-skill, though they are actually far too high-skilled for a robot. But they don’t need a university degree.

Tasc ’s recent report Precarious Work Precarious Lives also reveals that many people, often with high levels of education are trapped in zero-hour or if-and-when contracts that provide no security, and are often low paid.

This is not a good development for graduates or non-graduates. Government policy must focus on quality jobs, at all skill levels, not just job activation.

So why do politicians still embrace ever more higher-education, despite the uncertain prospects?

Partly, I think, because opening more universities is something they can actually do, easily. But also, and crucially, because graduates earn more than non-graduates. At least on average.

Politicians look at this gap, and draw the wrong conclusions. Suppose that, on average, graduates earn €10,000 a year more than non-graduates. It’s tempting to conclude that, if you move an additional school-leaver into the graduate group, they’ll earn €10,000 more every year too.

Move thousands more, and the whole economy will flourish, as their new skills translate into higher pay.

But this is a fallacy. It’s perfectly possible for a country’s average pay to go down and the gap between graduates and non-graduates to widen at one and the same time.

At the end of the last century, average incomes did flat-line for American men, and so did the average for men with a tertiary education - although those at the top got very rich.

Meanwhile the gap between graduates and high school drop-outs widened. Graduates weren’t turbo-charging economic growth - but it was still very sensible indeed to get a degree.

And that, of course, explains why everyone is so keen to go to uni. Whether or not you get the job of your dreams, without a degree you’re likely to be frozen out. Doors may not open with a degree. Without one they slam in your face.

Yes, unless we rethink a system which pushes ever more young people straight into full time degrees.

We should be designing education which is genuinely about “lifetime learning”, not sorting people for life at 18 by whether and which university they attended. And the sooner the better.

Alison Wolf is a cross-bench peer in the UK parliament and professor of public sector management at King’s College London. This article is written in a personal capacity.