Structural assessments of schools to be completed 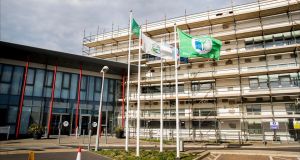 Ardgillan Community College in Balbriggan, Co Dublin, part of which has been closed due to structural flaws. Structural issues have been identified in a further five schools built by the same developer. Photograph: Liam McBurney/PA Wire

Preliminary structural assessments of 42 schools at risk of safety defects were due to be completed on Tuesday night, with details of any further school closures or disruptions to follow over the next two days.

Safety reviews of the schools, built by Tyrone-based developer Western Building Systems (WBS), began after structural issues were discovered in Ardgillan Community College, Balbriggan, more than a week ago.

Since then structural issues have been identified in a further five schools also built by the developer. The Department of Education expect to inform parents and staff if issues are found in any other schools, and outline the extent of any disruptions to students, by Thursday at the latest.

Engineers will conduct more detailed assessments over the next two days in any schools where potential problems were identified by the initial review.

Efforts to source replacement accommodation for affected schools have been ongoing by a department team, ahead of students returning from midterm break on Monday.

In three schools that had to close over structural issues – Tyrrelstown Educate Together National School, St Luke’s National School and Gaelscoil Eiscir Riada in Lucan – department officials said alternative accommodation had been found for all classes, in other schools.

“School transport arrangements will be put in place from the existing school buildings in order to minimise disruption to students and their families,” a department spokesman said.

A contractor has been selected by the department to carry out any internal or external work on schools where issues are identified, the department said in an update on the controversy.

Two Dublin schools, Castlemills Education Centre in Balbriggan and Scoil Chaitlín Maude in Tallaght, will open as normal on Monday, but will require protective fencing and decking after structural issues were found in the exteriors.

Problems first emerged with schools built by WBS in October 2015, when fire safety issues were discovered at Rush-Lusk Educate Together primary school.

Following the audits, the department announced further fire safety reviews would be carried out at 25 other schools delivered by the construction firm.

Structural problems were discovered when a wall was opened for inspection during a fire safety audit in Ardgillan Community College. A structural engineer found ties fixing the exterior and interior walls were absent or inadequate in places, and were at risk of collapse during storm-force winds.

The developer has been paid more than €80 million since 2013 by the department for school building projects.

The department is taking legal action against the developer over several schools where fire safety problems were found.

In a statement, WBS said it welcomed the review of structural safety in the schools and “continue to contribute to this process”.

“It is crucial for everyone that we better understand why schools previously certified as substantially complete and suitable for occupation and which also had defects certificates subsequently issued by the department’s advisers are now being assessed by the department,” the statement said.

The firm said it would release a comprehensive statement when the department’s initial review was completed.