How CAO applications are processed 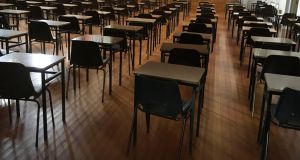 The points for any given third-level course can rise or fall each year and is determined by the law of supply and demand. Photograph: Bryan O’Brien

The Central Applications Office (CAO) is a not-for-profit company established by the higher education institutions in the Republic of Ireland. Colleges delegate to the CAO the centralised processing of applications for undergraduate courses. The colleges still make all decisions regarding offers of places, including where students are being advantaged by schemes such as the Disability Access Route to Education (Dare), Higher Education Access Route (Hear), or given elite status due to high performance in sporting or other designated skills.

Since September 2017 all colleges have operated a new points scale based on the new Leaving Cert grading system and other internationally recognised second-level terminal exams. The new points scale has been applied by the CAO to every applicant’s results (current or previous).

Where an additional assessment (apart from exam grades) partly determines entry to a course – for example in artistic, musical, architectural or medical courses – colleges designate them as “restricted” courses and only accept applications up to February 1st (March 1st for amended applications). The applicants are graded on the additional assessments, to determine suitability for the programme, and these grades are added to their eventual Leaving Cert points score.

Some colleges will assess qualifications other than those secured in the Leaving Cert. Trinity College Dublin, for example, runs its own matriculation examination in biblical studies and geology which any applicant can register for by March 1st and sit in April. When the applicant receives their Leaving Cert results in August, they can use their best six scores from among their grades including those secured in either or both matriculation subjects.

As outlined above, colleges reserve the right to prioritise certain applicants through programmes such as Hear supporting economically disadvantaged students, Dare, elite sport or artistic ability, etc. These students may be offered places based on up to 20 per cent fewer CAO points than those required of mainstream applicants.

On a negative note, the numbers applying for both programmes have increased substantially since it was established in 2010. By 2017 the numbers deemed eligible for Hear had increased 87 per cent from 2,279 to 4,287, while those securing Dare statuses had increased 274 per cent from 948 to 3,542. These numbers have continued to increase over the past two years. There has not been a corresponding increase in the numbers of places offered on programmes, which leaves many of those who secure eligibility with no offer.

This clarification should dispel the perception that securing Hear or Dare eligibility leads to an automatic reduction in CAO points requirement for each successful applicant. If there are four such places on a specific course only the top four applicants as determined by the criteria applied by the college get an offer, leaving the other eligible applicants empty handed.

What determines the CAO points required for any specific course?

The points for any given third-level course can rise or fall each year and is determined by the law of supply and demand. This year sees the third set of new grading and CAO points, reflecting the scores required in 2020, to secure a place in a specific course, as published in this supplement.

How do colleges determine who gets which place?

Once the Leaving Cert and other recognised exams results are known, the CAO matches each applicant’s results to the minimum entry requirements for each course they have listed, to determine which ones they are now eligible for. Once completed they start by offering places to those with the highest points. The lowest entry point score for any course (published by the CAO after the results) is determined by the points of the student offered the last available place.

So, colleges have no role in setting CAO points requirements?

In theory no, but research undertaken some years back by a task force on reforming admissions, chaired by Maynooth University president Philip Nolan, showed that some colleges, by varying the number of places offered, seek to keep points above a psychologically significant number.

For example, far more places are offered on 500 points than on 499. How can colleges achieve this goal of having lots of high-points courses? They may subdivide an area of study into smaller subsets of this discipline offering each subset as a separate course, with a small number of places on offer, in the hope of attracting higher-points students, impressed by the status of each programme.

College X with a large generic programme, with, say, 500 places, subdivides it into 10 specialised courses in the discipline, with 50 places in each. If the course was offered with 500 places it might offer the last place to a student with 420 points; but by offering 10 courses with 50 places each, each course might require points over 500, which raises their prestige.

Applications also increase each year, due to our demographic profile, and will continue to do so over the next decade as an extra 50,000 students now entering second level make their way through our education system. Thus, the battle for places on prestigious courses will intensify, and the entry points of the last applicant to squeeze through the door will inevitably increase.

The only way to stop this is to increase the number of college places to match population growth. With over 20 per cent of places now being allocated to international students to increase revenue, the only way for CAO points scores to go is upwards. If the Government were to increase funding for both additional capital infrastructure and the appointment of additional lecturing staff, additional places could be created to meet the increased numbers of Irish and other EU applicants who will be seeking college places in the coming years.

Broadening the area of study in first year course?

Following publicity about the issue of artificially subdividing disciplines for marketing purposes, colleges have come under pressure to reduce the number of degree programmes.

Over the past few years some have cut down, offering applicants broad general first-year programmes within a discipline, eg arts, science, engineering, etc.

However, others have done little. Therefore, the overall number of courses has only dipped slightly. The number of level eight honours degrees has grown from just over 200 courses in 2000 to 1,124 today but is down by 20 on 2019.

The coming years will show if colleges can overcome the temptation to put the long-term interest of the student above marketing and bring about a significant reduction in the vast range of choices facing students each year.

If this goal can be achieved it should lead to lower drop-out rates among first years as they are given freedom to explore wide areas of knowledge, before choosing which aspect of the discipline most interests them. They can then choose to specialise from second year onwards.