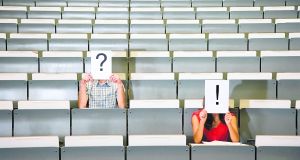 The 50 places on offer in economics and finance in UCD have all been filled by students who have secured more than 600 CAO points. Photograph: Getty Images

About 50,000 applicants received an offer of a college place from the Cental Applications Office (CAO) on Thursday afternoon. Here are some of the big trends from this year’s figures.

Uncertainty generated by Brexit seems to have resulted in a significant drop in the points requirements for most courses in the agricultural and food sectors.

Another contributory factor may be the introduction of a new agricultural science degree in UCC, which adds significantly to the places on offer.

Demand is at its highest and points requirements are increasing in areas where there is strong jobs growth, such as the computer science, engineering and technological sectors.

It may seem unimaginable, but the 50 places on offer in economics and finance in UCD have all been filled by students who have secured more than 600 CAO points – a new high for a course.

However, despite strong jobs growth, there has been no great increase in commerce , law or general science. Tech and engineering seem to much more attractive to this year’s applicants.

Also, the strength of the economy may well be the main reason why fewer adults and further education graduates are currently seeking college places through the CAO. They seem to be choosing employment over education.

This year there has been a strong increase in the numbers of students taking higher level papers. Some 33 per cent now sit higher level maths, most of whom are securing the 25 bonus points.

There has also been a significant increase in the numbers of students securing five, six and seven H1s, which seems to have increased the points requirement pressure in those courses requiring over 500 points.

Applicant numbers are up 2 per cent, but level-eight offers are up 4 per cent, a trend which has been an annual feature for almost 20 years. Levels six/seven are, on the other hand, down again this year and this is reflected in a drop in CAO points requirements for courses at this level.

As has been evident for a number of years now, demand for places in liberal arts programmes is flat, but they still represent by far the biggest programmes in the country. Maynooth University, where points requirements dropped by four to 316, has offered some 1,500 places this year, an increase of 100 on last year. Arts in UCD is down to 336, while there has been little shift in other major arts courses at Mary Immaculate, NUIG, and UCC.

Nursing is generally in high demand, though many courses saw a drop in points, especially in areas such as general and intellectual disability nursing and midwifery.

Primary teaching, also, saw some small surprise drops in points for courses at Marino, Maynooth and Mary I. However, early childhood education was up across the board.

Also, the paramedical programmes are all up significantly. Pharmacy is up by 22, 12, and three in UCC, Trinity and RCSI. Occupational Therapy is up by 11 in UCC and NUIG, and by 14 in Trinity. Optometry is up in TU Dublin by 23.