Girls and autism: Why are so many going undiagnosed? 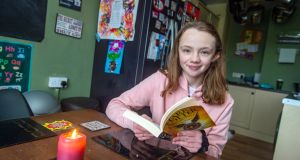 Fourteen-year-old Lily Stevens may be from Cork – but she belongs to Gryffindor House. Like many other teenagers, Lily loves Harry Potter. She has read all the books, seen all the films and, of course, has the T-shirt. When she was younger, she loved One Direction, but now it’s Queen that take centre stage. And Lily also has autism – though you might not know it to meet her.

In fact, unlike her brother Seán who also has autism and was diagnosed aged four, Lily was 12 before she was eventually assessed and diagnosed.

“Her teachers brought it to our attention,” says Jon Stevens, Lily’s father. They raised concerns around Lily’s social skills and her closeness to just one friend. Jon and his wife Karen were shocked when the teacher suggested having Lily assessed.

“She was so different to Seán that, when she was diagnosed with autism, it was just so hard,” says Jon. “His is in your face while she keeps hers inside.”

A lot of things began to make sense after her diagnosis, he says. When Lily first started school, she would cry a lot and hide in the classroom toilet.

“When I think about it, she was obviously overstimulated, but we thought it was just common for kids to cry when they start school,” he says. The crying gradually stopped. “She found a friend, that’s what got her through.”

For people with Autism spectrum disorder (ASD) early diagnosis and intervention is key, but the delay in Lily’s diagnosis is not unusual for girls.

Research suggests that four times as many boys than girls have autism, with that ratio dropping to twice as many when an intellectual disability is taken into account, but some now also believe that not all girls with autism are being diagnosed.

“I do believe they are being under-diagnosed and that is doing them a huge disservice,” says Davida Hartman, director and senior psychologist at The Children’s Clinic.

While every individual with autism is different, the presentation of autism can differ in males and females.

“Younger autistic boys in my experience can often be more active, more deregulated and find it difficult to sit in class,” says Hartman. “Whereas the girls in general are more compliant, and so are not disrupting the class.”

She says many girls and women mask their autism in order to fit in. “They are essentially living in a world, and school system, that has been designed for neurotypical people, and the strains of conforming to this world can be very damaging and stressful for them,” adds Hartman.

There is a myth or misconception that autistic people lack empathy. But this is just that, a myth

Kirsten Hurley, lecturer in autism studies in UCC, was 22 when she was diagnosed with autism and agrees that masking can be exhausting.

“The research would indicate that it has a huge impact on someone’s wellbeing – some people have described it as a social hangover. They are exhausted from it and need to recover,” says Hurley.

Before she received her diagnosis, Hurley struggled in school and college and felt there was something wrong with her.

She was a bright student, but her behaviour served to frustrate her teachers as opposed to flag her autism.

“They thought I was just being badly behaved. I was constantly being told ‘you’re so clever if you just tried harder you could do this or do that’,” she says. “I remember writing an A4 page of all the things that were wrong with me before going in to see a counsellor.”

She says her life would be very different now if her autism had gone undiagnosed.

“I don’t even want to think about it,” says Hurley. “There is no way I would have finished university without a diagnosis because I had to get support from the Disability Support Service.”

While some girls may receive a late diagnosis, others are misdiagnosed. “There is a growing body of research linking eating disorders with autism and calling for all girls with eating disorders to at least be screened for autism,” says Hartman.

“Many teenage girls who come to us for an eventual autism diagnosis have previous diagnosis of ADD, or anxiety or other mood disorders.”

The lower number of girls diagnosed with autism limits the impact they have on how autism is understood.

“If you have a group of people for a study and most of them are male and you derive your understanding of autism from that group of people, then you have criteria completely skewed towards the male aspects of autism,” says Hurley.

Other studies indicate the existence of gender bias. The research shows that girls were less likely to receive a diagnosis even if their symptoms were as severe as boys.

“I think there is a lot of resistance to the idea that girls can have autism,” says Hurley. “People still say to me: ‘autism is really rare in girls, isn’t it?’”

Gender is one of the criteria taken into consideration when allocating special education teachers to mainstream schools in Ireland.

If the number of girls with autism is higher than those with a diagnosis, are the all girls’ schools at a disadvantage when it comes to supporting their students?

Further research the US and the UK also indicates the existence of a gender imbalance in referrals to an educational psychology service.

Myths around autism may also be contributing to the late, misdiagnosis or non-diagnosis of girls with autism.

“There is a myth or misconception that autistic people lack empathy. But this is just that, a myth,” says Hartman. “The autistic girls, and boys, that I know are generally extremely sensitive, in fact experiencing an over-empathy, which is very difficult for them to cope with day to day.”

People with autism can display impairments in areas of social interaction, communication and in restricted interests and repetitive behaviour.

Girls’ ability to mirror play can mask social and communication impairments. And, while they may have restricted interests, the nature of that interest may not raise a flag.

“They’ll often tend to like similar things to the other girls in their class and that might be another factor in preventing them being picked up by people,” says Hartman.

When Lily was growing up, for example, her intense interest was One Direction. “It looked normal to me, you’d expect them to be into ‘boy bands’,” says her father.

Girls may succeed in camouflaging their autism in the early years, but it becomes increasingly difficult as they get older and social interactions become more complex.

“Autistic girls, as teenagers, I think are very vulnerable,” says Hurley, “We don’t have a safety curriculum, we don’t talk about safety in relationships, that is kind of information that’s passed between people’s peers and if you don’t have that peer group then you miss that information.”

This is something that weighs heavy on Lily’s father’s mind.

“I’m most worried about Lily on social media, she doesn’t see the danger in it,” he says. “[Girls are] expected to know things growing up as a teenager but she wouldn’t know those signs. They are the things that worry me the most.”

The reasons for the late or under-diagnosis of females with autism can be debated, but the lack of access to services and therapies is indisputable.

Lily, who was diagnosed aged 12, has yet to access any services.

“We haven’t even had a phone call,” says Jon. “There has to be more support, it has to be quicker. I have no idea when I am going to get a letter in the door to tell me she has an appointment.”

Autism and education: in numbers

14,000 – estimated number of Irish students in school population with autism

4:1 – estimated proportion of boys versus girls diagnosed with autism in US

14% – proportion of all students with autism who attend special schools.

Sources: National Council for Special Education; and US CDC.

Undiagnosed autism among adults: ‘Many are socially isolated, not able to work and not able to access a diagnosis’

Fiona Ferris, deputy chief executive of the autism charity AsIAm, says that when adults finally receive a diagnosis, it can be a difficult and bitter-sweet discovery.

“There is an awakening because they think ‘finally know who I am’ but then a grieving because they imagine what it would have been like if they had known all these years, and then the lack of support that follows. They are not a priority because it is felt they made it this far without support,” says Ferris.

She says there is no diagnostic public process for adults on the spectrum.

“You could go to a GP and be referred to a public psychiatrist. But I know a lot of autistic adults, many of whom have been diagnosed in recent years, and each one of them has had to go privately, and even at that there is just a handful of psychiatrists or psychologists in Ireland who focus on adult diagnosis. Public route to a diagnosis really is not an option for an adult,” she says.

Ferris says research indicates that between 80-85 per cent of autistic adults are long-term unemployed or underemployed.

“This means that if you are an adult seeking an autism diagnosis there is an 80-85 per cent chance that you are unemployed which means you’re not in a financial position to afford this assessment,” she says.

“How many adults are still socially isolated, not able to work and not able to access a diagnosis because they don’t have the money for it?”