Free speech under threat on our college campuses

Trigger warnings and safe spaces: should a student’s desire not to be offended stifle freedom of expression? 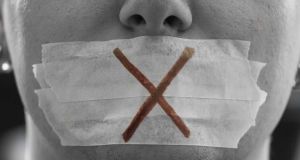 Free speech on college campuses is under threat from advancing political correctness, which increasingly dictates that the right not to be offended is given priority over freedom of speech. File photograph: iStock

These are the central tenets of campus life - helping young people to broaden their minds, question their own world view and develop the resilience necessary for the real world.

But on modern campuses, these values are under grave threat of being cast aside as a trend towards dogmatic political correctness increasingly dictates that a student’s right not to be offended is given priority over all else - including freedom of speech.

It even has its own lingo: “triggering”, which is causing an emotional response; “micro-aggression”, a comment that is unintentionally demeaning to a member of a minority group, and “safe spaces”, a phrase originally intended to mean somewhere free of discrimination, but increasingly meaning a place you can be sure not to be offended, or challenged.

In Trinity, a student protest at a talk being given by the Israeli ambassador Ze’ev Boker was called off in February when protesters blocked the door.

At UCC, a conference on Israeli law was halted after a flood of complaints, and was held last month at an alternative venue other than the campus for two of its three days.

When Donald Trump won the US election, many college campuses offered support services for students they deemed unable to handle the results of the democratic vote.

Law professors have been petitioned not to include questions on sexual assault in final examinations, and English departments are allowing students to skip literature with content that may be upsetting

The University of Kansas offered therapy dogs for comfort, Cornell set up a “cry-in” where staff handed out cocoa, and the University of Michigan had a play area with colouring books.

A talk in Berkeley by the polemicist Milo Yiannopoulos resulted in violent riots when students’ protests at him being given a platform turned ugly.

Law professors have been petitioned not to include questions on sexual assault in final examinations, and English departments are allowing students to skip literature with content that may be upsetting.

It has spread to the UK, where there have been campaigns in Bristol and Oxford to wipe out reminders of controversial historical figures on the grounds they would cause offence.

For now, common sense prevails in Britain. Bristol University said it would be “disingenuous” to give in to protesters and erase history by renaming Wills Memorial Hall, named after its first chancellor Henry Overton Wills - a 19th century tobacco magnate with links to the slave trade.

Oxford’s Chris Patten told students to “embrace freedom of thought, or think about being educated elsewhere” in response to a call to remove a statue of imperialist Cecil Rhodes.

Principal of Dublin’s Alexandra College, Barbara Ennis – who prepares young women for college life - says students do not develop in a comfort zone.

“The biggest trait young people have to develop is resilience,” said Ennis.

“In our school, we are preparing students to make their contribution to the world. The fundamental value we instil in our girls is independent thinking.

“They make decisions for themselves about what they find acceptable and don’t. We help them to see the notion of censorship as never really being appropriate.”

Alexandra College holds a series called Alex Talks, modelled on Ted Talks, and students can choose any subject they like, in front of a school of 550 pupils, without censorship.

“Our mission statement very clearly states we welcome diversity. But if you are cosseted from ideas that are a bit challenging, how are you supposed to develop your own? If you have ideas that are controversial and are not politically correct, how are you going to test them?

“If you stick with one set of ideas until the day you die, you are not engaging in lifelong learning.

“Certain opinions are not acceptable and have to be challenged, and it is your responsibility to listen to it, accept it or challenge it, and put your own point of view across in a respectful manner.

Students are not used to being challenged and as a result, when they are, their reaction is to go into meltdown mode

“You listen, articulate your views in a calm way, show you don’t agree or rethink your own thinking.”

She believes that an over-awareness of young people becoming depressed or anxious is behind the increasing cosseting in colleges.

“Part of the problem is being over-cognisant. Students are not used to being challenged and as a result, when they are, their reaction is to go into meltdown mode - when what they need to do is develop self-esteem, self-confidence and resilience.

“That’s what we work on here and that is what I will continue to work on as long as I am in this school.”

Prof James Bowen of UCC believes that the increasing “corporatisation” of universities is much to blame.

He said: “Restrictions on freedom of speech in universities are becoming progressively more worrying. One pressure is coming from corporatisation of universities, the influence of private money.

“Universities need to supplement their state income with income from grant-funding agencies, from companies who want to commission research, from rich donors to fund core activities.

“The result is that universities are becoming a lot more anxious about not offending people, and this is having an increasingly chilling effect on freedom of speech in universities.”

His conference on international law in Israel was almost called off after numerous complaints.

“The pressures we experienced in putting on our conference is merely one aspect of that increasing unwillingness of universities to cause offence.

Encountering views contrary to your own should not be avoided. You may find them surprising initially, but these things are mind-broadening and should be supported

“You might think the desire to cause offence is obviously a good desire.

“Just because you are saying something that is found offensive by someone, doesn’t mean it is morally reprehensible. Hitler would have been offended by the expression of some views.”

He cited writer Beatrice Evelyn Hall: “I disapprove of what you say, but I defend your right to say it to the death,” commenting: “That used to be the interpretation of academic freedom in universities.

“Encountering views contrary to your own should not be avoided. You may find them surprising initially, but these things are mind-broadening and should be supported.”

Trinity provost Patrick Prendergast described the protest against the Israeli ambassador’s talk as “an unacceptable attack on free speech, the antithesis of what Trinity stands for”, and said the protesters had “violated a fundamental belief of a university as a place to facilitate and exchange ideas”.

However, Dr Peter Stone, assistant professor in political science, said the protest was not just a matter of free speech and it was necessary to look deeper into the reasons behind it.

“It would have been reasonable for the talk to go ahead, but that said, it wasn’t being given by an obscure person with radical ideas no-one can hear from. Anyone can easily find out what the Israeli government thinks about things.

He believes issues arise because of “extremely simplistic and unhelpful uses of the term ‘free speech’ ”.

“It is such an overarching value, it’s like ‘democracy’ or ‘freedom’, everyone wants to claim it. People think simply stating: ‘It’s an expression of free speech’ settles the matter, but it is just part of the debate. Why is it important? How far should it extend?

Some would argue it all boils down to the same issue: over-protecting students.

Oxford University’s vice-chancellor Louise Richardson says students need to be exposed to uncomfortable ideas “so they can think about why they feel uncomfortable and what it is they object to.

“Then they frame a response and use reason to counter these objectionable ideas, try to change the other person’s mind and be open to having their own minds changed.

“That is quite the opposite of the tendency towards safe spaces. I hope universities will continue to defend the imperative of even objectionable ideas being spoken.”