Where have all of Ireland’s teachers gone? 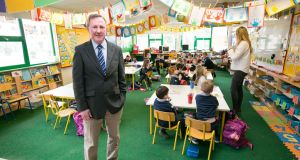 Joe Lyons, principal of Ballybrown St Joseph’s National School in Limerick, says having to split or cram several classes into one room is a health and safety issue. Photograph: Brian Gavin/Press 22

Sunnier climes, the chance to save for a mortgage and a better quality of life are just some of the reasons that newly qualified teachers are ditching casual work here in such large numbers.

Principals say it is becoming increasingly difficult to find substitute teachers to fill in on sick days at primary level. It means cramming children into other classes or, for smaller schools, closing for the day.

At second level, students are increasingly being taught by unqualified staff due to a major shortage of teachers in key subjects such as Irish, European languages and home economics, according to school management bodies (see ‘Short-term absences are a nightmare for secondary schools’ below).

The Irish National Teachers’ Organisation (INTO) estimates that about 800 substitute teachers are needed to cover absences in the 3,300 primary schools across the country.

Peter Mullan of the INTO says Irish teachers are in demand abroad and their reasons for leaving are multitude. A lack of regular work and difficulties securing permanent contracts mean being a substitute teacher is a tough existence.

“Teachers are thinking to themselves, ‘Why would I stay in Ireland for the odd day here and there when I can get guaranteed work abroad?’,” says Mullan.

Mullan says the Government needs to address housing policy and pay policy because young teachers “are getting squeezed on the double” with lower pay and higher living costs.

“We need the Government to deal with pay inequality for once and for all as it is causing a major problem. It’s creating discontent and ill-feeling among newly qualified teachers. Young teachers can’t get a fair wage in Ireland and are going elsewhere,” he says.

“It’s impossible to live and rent in Dublin if you are only getting subbing. You would need to be living at home because you couldn’t pay the types of rent they are looking for in Dublin because of the uncertain work and irregular income.”

This isn’t, of course, a new issue, though it is growing more acute according to teachers and management bodies. They say that the quality of teaching is now at real risk at a time of ambitious Government policies aimed at ensuring Ireland becomes the best education system in Europe over the coming years.

“We had this situation about 15 years ago when hundreds of classes were being taught on a regular basis by people with no qualifications,” says Mullan.

“They were the very classes that had a dip in the international literacy tests so this has to have an effect on academic standards if we can’t get qualified teachers to sub.

“Anybody can go in for five days; you don’t even need a degree. You literally need someone in a childcare position who can make sure they don’t do damage to one another.”

This measure was only intended for short-term absences, he says, and was never a long-term solution.

Joe Lyons, principal of St Joseph’s Ballybrown National School in Limerick, says the problem of finding substitute teachers is perennial but has become increasingly acute due to emigration.

It is a medium-sized school with 15 teachers. Two of the teachers are on maternity leave and one is about to go on leave, so it has an urgent need for substitutes or short-term cover.

“There was one Monday morning recently where we had four teachers out on sick leave and I couldn’t get a sub for any one of the four. So we had to split a class, I had to teach a class and we had to get the learning support teachers to take a block each,” he says.

“In September, schools get lots of subs but there are lots of Sunday nights where I have rang 30 or 40 teachers and none of them are available.

“I tried the INTO sub search recently and put in a 10km radius and then 40 km and there was no substitute available within 40 km of Limerick on that day.”

Lyons says having to split or cram several classes into one room is a health and safety issue and means students with special education needs get less attention. Teacher-student quotas mean classrooms are typically full to the brim.

“If you already have 30 pupils in a class and you add them on top, it’s physically challenging to teach or to manage that many students as well as being a health and safety issue,” he says.

New regulations regarding Garda vetting of substitute teachers that came into force in July 2016 have compounded the problem.

Lyons says he doesn’t blame young teachers for seeking a better life abroad and that pay inequality needs to be re introduced.

“We had a student teacher in here and he told me his plan is to get a permanent post here and then take off to Dubai, make a few bob so he can get the deposit for a house in Ireland and come back,” he says.

“The thinking among young teachers is you will not make enough money here to buy a house unless you go abroad.”

Lyons says the Department of Education needs to reintroduce a panel of supply teachers that are available in an area for work.

“It’s the way to go. Those teachers would have a year-long contract and would be available for regular work for schools in the area, rather than principals having to ring up 30-40 teachers on a Sunday night and then hearing that they’re not available,” he says.

So what are principals to do when they need cover? The INTO’s online subsearch facility has a list of teachers available for work in each area. There is also a “text-a-sub” service to which principals and teachers sign up. Despite these services, principals say it is sometimes impossible to find a trained teacher.

Primary school teacher Kyna Rushe, who works in a large Dublin primary school, says the current subbing situation is leading to teachers in small schools not taking sick days because they don’t have any staff to cover.

“In a two-teacher school or Gaeltacht school, that’s what they have to do because they don’t want to put the burden on their colleagues,” Rushe says.

“As schools find it difficult to find substitute teachers to cover class teachers, this leaves the principal to split classes. Class sizes become 40-plus in some cases,” she says.

It means standards are at risk of slipping, which causes great difficulty for children with special educational needs . These children, especially those with autism, find it difficult to focus in such a busy environment or where there is a change to their routine, says Rushe.

Against this backdrop, teaching abroad can be an enticing prospect.

“ In places like Dubai they are offering free accommodation, setting-up costs and one flight home per year,” she says.

“Newly qualified teachers are not waiting around to see if the Department of Education sorts out the pay parity issue.”

‘Short-term absences are a nightmare for secondary schools’

Pupils at second level are increasingly being taught by unqualified staff due to a major shortage of teachers in key subject areas, according to school managers.

Antoinette Nic Gearailt, president of the Association of Community and Comprehensive Schools, says there are urgent gaps in areas such as Irish, European languages, home economics and maths.

Finding qualified teachers to teach them, however, is another matter.

“Last year the issue of undersupply in certain subject areas – most obviously Gaeilge, modern languages and home economics – was highlighted. The situation remains the same . . . a year later,” she told the association’s annual conference recently.

“Schools are now reporting increasing difficulties in recruiting teachers in other subjects, most notably maths, science, resource and guidance. Short-term, unexpected absences have become a nightmare for schools.”

In a survey of the association’s 90 or so secondary schools, it found that 96 per cent reported difficulties in recruiting part-time or temporary teaching cover.

The issue was most acute in Irish, where the majority reported difficulties finding teachers (67 per cent), followed by modern languages (51 per cent), maths (30 per cent), home economics (26 per cent) and science (20 per cent).

The quality of teaching across primary and secondary schools may well be at risk due to a lack of qualified teachers, according to an unpublished report commissioned by the Department of Education.

The findings are contained in Striking the Balance, a report prepared by a technical working group linked to the Teaching Council and seen by The Irish Times.

It confirms that at second level there is a shortage of teachers in key subjects – such as Irish, home economics, physics and European languages – which is resulting in the use of “out of field” teachers. These are teachers who are not specifically qualified in a subject area and lack detailed knowledge of the curriculum.

Minister for Education Richard Bruton, however, has pledged to publish the report – which was finalised in December 2015 – over the coming weeks.

However, he maintains that the Government’s move to hire an extra 4,600 teachers between last September and next September means teachers who had been emigrating will increasingly be able to find jobs in Irish schools.