Rising rents: ‘I don’t want to share a room with three others’ 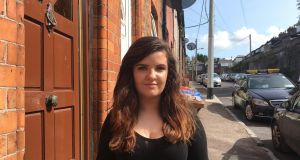 Kate Stapleton, a final-year student at University College Cork. She says students face an acute shortage of rental accommodation. Rooms that are available are at sky-high prices or of poor quality.

There was no photo on the website. When I got there, the four-bed house needed a good going over with a hoover and a couple of litres of Dettol .

The bins could also have done with being changed a week earlier given the stench.

How much? €2,000 a month. This wasn’t London, Manhattan or Singapore. This was Wilton in Cork.

These days, paying out €500 a month for a double-room on the outskirts of Cork City isn’t out of the ordinary.

But the standard of this property on offer didn’t come anywhere close to qualifying for the price.

This is the reality facing thousands of students like me as the scramble for accommodation heats up ahead of the new academic year.

Viewings can be strange and sometimes unsettling. One of the most surprising was a house where the entire viewing was conducted as Gaeilge.

Personally, I have no problem using the cúlpa focail, but afterwards I was asked if this was done to check where I was from.

I certainly hope not. But given the landlord clarified at the end of the viewing that he wouldn’t be taking “anyone who was from the city centre”, I simply don’t know.

My search began last March, when a friend and I decided to link up and look for somewhere to live for our last year of studying in UCC.

We joked about the fact that we were the ideal tenants as two final-year girls with glowing references, steady part-time jobs and reasonable budgets.

Naively, we expected to have little issue finding accommodation for the upcoming year.

We certainly didn’t think that come August, with little over a month to go, all our communication would be through the medium of sending each other links to ads on daft.ie, rent.ie, UCC’s accommodation website and tagging each other in Facebook posts about free rooms.

It’s a shock having come from Edinburgh, where I went for a placement as part of my course last semester.

The letting agency over there took no issue with a short tenancy. It only took about two weeks between emailing about the ad and getting the lease. They weren’t bothered about our student status, and the location and rent were almost too good to be true.

Just over €1,600 will get you a spacious apartment between four people, within walking distance to town and with a formal rental agreement that acknowledges both your rights and responsibilities as a tenant.

Many students are getting desperate now as college draws near.

Luckily, I’ve just found somewhere for next year (through Twitter, no less), and I’ve always had cousins I can call on for somewhere to crash for the first few weeks.

It’s close to college and within budget. I’m one of the lucky ones. There are countless students who won’t be as lucky as me: ones who will be crashing on couches for the semester, some who will commute for hours to and from lectures every day, more again who will have to defer a year either due to lack of somewhere to live.

I’m a firm believer that students need to learn how to get to grips with grown up life, how to deal with problems living away from home, how to liaise with landlords and take on responsibility for themselves.

But, in return, I think we should be able to promise our young people that they can live in reasonable, clean housing, where you don’t have to share a bedroom with three others and there aren’t 10 people fighting for a slot in the broken shower.

Is that too much for the next generation to ask for?