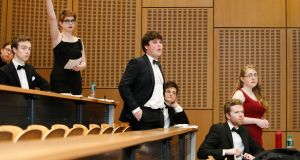 Student competitors from Trinity College Dublin and the Solicitors Apprentices Debating Society of Ireland secured places in the final of The Irish Times Debate 2018-2019 following a hotly contested competition in UCD on Monday night.

The motion up for debate at the semi-final - “this house regrets the decision to invite the Pope to Ireland” - resulted in lively, combative and entertaining contributions.

Daniel Gilligan and Ronan Daly of TCD Hist won the team competition, while Lonán Collins of Solicitors Apprentices Debating Society of Ireland won the individual round.

The final of The Irish Times Debate will take place in the Fitzgerald Debating Chamber, UCD on February 22nd.

The hosting society is UCD Law Society and the motion for debate is: “This house would rescind Ireland’s position of neutrality in favour of European standing army”.

The chairperson for the final will be Jack Chambers, Fianna Fáil spokesman on defence.