It should be possible to address pay disparity for teachers, TUI says 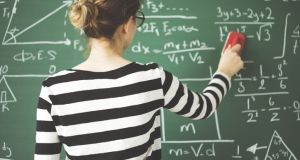 Graduates are voting with their feet and changing career because of the disparity in pay between teachers who qualified before 2010, TUI says. Photograph: iStock

The president of the Teachers Union of Ireland (TUI) said if it was possible to sort out the nurses pay dispute then it should be possible to address the disparity in pay for teachers, he said.

The nurses’ pay deal shows the Government was prepared to act in a crisis and “there is a crisis in teaching”, Seamus Lahart said.

He warned that children will be sent home from school because there are not enough teachers.

He says graduates are voting with their feet and changing career because of the disparity in pay between teachers who qualified before 2010.

The TUI represents about 17,000 teachers and lecturers in vocational schools and third level colleges and universities.

Mr Lahart told Newstalk Breakfast the Labour Court decision to intervene in the nurses strike indicated the Government appeared to be prepared to act when there is a crisis.

“Something needs to be done about it. There is a crisis in teaching.”

He added that the TUI had “toned down” its campaign during the nurses’ dispute, but would now be resuming its campaign in earnest.

“We have come through a few years of growth, are we waiting for the next crisis?”

Mr Lahart said there is an inevitability about the crisis in teaching. Children may need to be sent home from school, classes could be doubled in size because there are no teachers.

“Young graduates are deciding with their feet, they are choosing different careers.”

Meanwhile Gardaí are examining whether they can use the terms of the new proposals that led to the suspension of the nurses’ strike to form the basis of new pay claims of their own.

The fall-out from the nurses’ pay deal is expected to feature prominently at meetings of the national executives of the two largest Garda staff representative bodies, the Garda Representative Association (GRA) and Association of Garda Sergeants and Inspectors (Agsi) which are due to begin two-day meetings in Dublin this morning.

While neither association commented publicly last night on the new Labour Court recommendation that saw the postponement of three days of planned industrial action by nurses this week, sources in both organisations were forthright in their appraisal.

The knock-on implications for the Government from the nurses’ deal are likely to become clearer after the public service committee of the Irish Congress of Trade Unions meets to consider the issue next week.

However, a number of union leaders privately believe that those who argued to members that the only money available was that set out in the public service agreement have been left in a difficult position on foot of the nurse deal proposals.

A number of union leaders also believe the industrial peace clause in the public service accord is now dead as following the Government’s decision not to apply financial penalties to nurses for going on strike – as it did to second-level teachers in 2016 – it could never credible threaten to apply sanctions on any other group for breaching the accord.