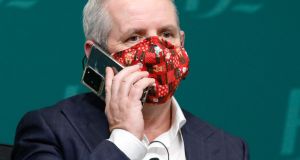 People in Ireland are facing into the highest risk Christmas of their lives, the chief executive of the Health Service Executive (HSE) has declared.

With the phased relaxation over the festive period of restrictions to curb the spread of Covid-19, Paul Reid said there is the understandable temptation for the public to drop its guard in the fight against the coronavirus.

As people meet in restaurants when they reopen over the weekend, they will naturally want to hug loved ones and friends as they part again, while generations will mix in indoor settings for days over Christmas itself, he pointed out.

“It is a heightened level of risk,” he warned.

“This is going to be the highest risk Christmas probably any of us have experienced across the board.”

Speaking during a press conference at Dublin’s Dr Steevens’ Hospital, Mr Reid said there has been much talk of another lockdown in January if cases soar again because of the festive easing of restrictions but that “it doesn’t have to be that way if we take all of the precautions and do the simple things very well”.

While encouraging people to enjoy the holidays and meeting their families, he urged them to “be on their highest level of guard” over the coming weeks.

Announcements on the development of safe and effective vaccines has given the country and the world an “increased sense of hope”, but immunisation “will not be the first line of defence for now or some time to come”, he cautioned.

There is a “high risk” of a public perception that the imminent roll out of vaccines meant public health precautions which “have done us so well” during 2020 were no longer needed, he said.

Mr Reid said it was still too early to predict when a mass vaccination programme will allow some return to normality in the country.

The HSE is working on an “end to end” vaccination strategy from supply and logistics, to immunisation, to follow-up surveillance, which is to be presented to Taoiseach Micheál Martin on December 11th.

Uncertainty remains over delivery dates of vaccines, which vaccines will arrive when, the volumes involved, but the plan is to start vaccinating the most vulnerable in January.

“The reality of it is, and the World Health Organisation has been very clear on this, we will still be coping with Covid into the new year, “ said Mr Reid.

Ireland, through a number of advance purchase deals with five - and soon to be six - vaccine manufacturers will have access to around 16 million doses.

While there will be “no shortage”, they will arrive over an “extended period of time”, he added.

Mr Reid said there were currently 233 patients who have tested positive for Covid-19 in hospitals, with 31 of those in intensive care units.

“It has come down a bit over the last couple of weeks or so, but it is still at a reasonably high level,” he said.

There are currently 46 ICU beds available.

Ten of those hospitalised were aged under 18 while 34 were aged between 19 and 34 years. None under the age of 34 were admitted to ICU.

Another 73 of those hospitalised were aged between 35 and 64 years (with six of them admitted to ICU), while 157 were aged 65 years and over (three of them in ICU).

The HSE is currently dealing with nine outbreaks in hospitals, with 733 staff off work due to either testing positive or being in close contact with a positive case.

With the number of Covid tests carried out in the State set to reach two million this week, a second large “public community laboratory” under the National Virus Reference Laboratory is to be built to help deal with testing.

It is expected to be operational in the early part of next year. Some swabs are still being sent overseas for examination.

Asked about Covid-19 outbreaks in schools, Mr Reid said of 30,000 tests carried out there had been 760 positives.