Children to lose school places as waiting lists phased out 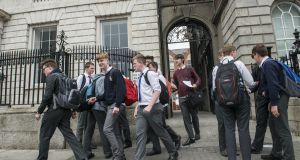 Parents who have put down their children’s names years in advance for fee-paying secondary schools will lose their advantage under new legislation which will phase out such waiting lists within about three to five years.

It is understood Department of Education officials are planning to introduce a relatively short lead-in time for the phasing out of waiting lists under amendments to school admissions legislation.

However, many private secondary schools – such as Blackrock College, Belvedere College and Glenstal Abbey – have the names of young children on waiting lists for admission for up to a decade or more.

A spokesman for Minister for Education Richard Bruton said the use of waiting lists for school admission can give rise to discrimination, in particular against people who have newly moved into an area.

He confirmed that amendments to the legislation to be published shortly will set out a short transitionary period for schools to adapt to the new legislation.

The new laws were originally due to come into force from September 2017, though it now looks likely it will be postponed until 2018 due to delays in the legislative process.

Many parents had hoped a much longer lead-in time that would allow them to hold on to places they felt they had secured for their children.

The National Parents’ Council Post-Primary has previously said banning waiting lists would frustrate many, while the school management body which represents most fee-paying schools has called for “appropriate” lead-in times to allow schools and parents to adapt.

Principals of a number of south Dublin secondary schools also say they expect legal actions from parents who will lose automatic school places due to any ban.

Under the school admissions bill, all children will be required to apply to enrol in a school in the year before enrolment.

This is aimed at levelling the playing pitch in admissions for children who move to a new area.

In addition, schools will be forced to set aside no more than 25 per cent of places for children of past pupils under the draft legislation.

The legislation will also ban any fees charged by schools in relation to admission, and require all schools to publish their admissions policies, including details on how they will provide for children who decline to take part in religious instruction.