Children without school places: ‘It’s heart-breaking and a national disgrace’

Almost 500 special needs children are in receipt of home tuition because they do not have a school place. Is the problem set to get even worse? 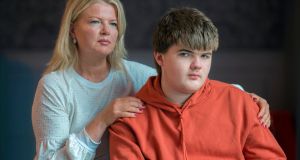 Marguerite Wilson and son Jack (15). He has autism and was unable to get a place in secondary school for a year. Photograph: Michael Mac Sweeney/Provision

Back to school. For 15-year old Jack Wilson, these three words mean more than the return of school bells, lost stationary and early-morning commutes.

They mean more because he was supposed to start secondary school last year - but ended up at home for months on end with nowhere to go.

Jack has autism and when he was in sixth class, his mother Marguerite, Wilson, contacted dozens of schools with special classes within a 40km radius of their home in Cork city – but every school gave the same answer.

When September came, Jack was at home with no tuition and no support of nay kind.

She was told by authorities to get all the school refusal letters on paper before she could begin to apply for home tuition for her son.

“Jack was at home with nothing... yet it was completely different ball game with his older brother James, who goes to mainstream. It all happened automatically.

“But there’s a huge gap for young people with special needs going to secondary. You have to fight for everything ...”

Eventually, six months into the school year, Jack’s tuition was granted and the 20 hours a week commenced in February 2018.

Home tuition, though, is no replacement for a school setting where children can socialise with their peers, she says.

“He missed out on the social side of school, the whole teenage experience, and it has affected his confidence,” she says.

Jack’s story isn’t an isolated one. So far in the current academic year there almost 500 children with special needs in receipt of home tuition because they are not suitable school places for them.

While the shortage at primary level has been well documented, campaigners say an even bigger problem is brewing at second level.

A list of special classes in mainstream schools, provided by the National Centre for Special Education (NCSE), gives the details of over 1,600 special classes across the State.

The vast bulk of these are at primary level; just over 400 are in post-primary schools.

This year a total of 167 new special classes were established; again, only 39 of them are in post-primary (and many of these newly-established classes are in schools that already have special classes).

With a shortfall of special classes at second level, where do these students go after primary school?

Graham Manning has worked as the ASD (autism spectrum disorder) co-ordinator of a post-primary school in Cork since 2011.

He has, reluctantly, had to inform many parents that contact the school, that there is no room.

“It’s the one part of my job that I hate,” says Manning

In many cases, however, students must travel outside of their community to reach these placements.

“We have one student that passes 15 closer schools on his was to us,” says Manning.

Placing students with special educational needs in schools outside their communities can increase their sense of isolation.

A spokesperson for the department, however, says that the NCSE is “satisfied that there are placements available to meet identified need.”

“Many children can progress to mainstream post primary with support of SNA (special needs assistant) and resource teaching hours, while more may transfer from primary to a special school,” a department spokesperson said

But Manning believes that enrolling these students in a mainstream class masks the deficit and often doesn’t appropriately cater for the student’s needs. “I can understand why parents do that,” says Manning. “They see it as the lesser of two evils.”

But not having access to the supports provided in a special class can have a negative impact on the students’ educational outcomes as well as their social and emotional development.

Demand for places in special classes extends beyond ASD units in mainstream schools to other areas of special education.

Anne Hartnett is the principal of St Paul’s Special School, Montenotte, Cork. The school caters for students with moderate to severe and profound learning disabilities.

“Certainly, since I have been principal, there has been a waiting list for places and I know that is echoed throughout the majority of other special schools,” says Hartnett.

She identifies the number of special classes opened in primary schools as a likely trigger for this deficit.

“You have children who did very well in a special class in a mainstream primary school but then, lo and behold, there is no equivalent place in a post primary school and that creates huge problems for the child and for the parents.”

Hartnett says there is a lack of support available to these parents.

“They need to find everything out for themselves,” she says.

“It’s a great gesture to say, ‘you must’, to schools but, before they must, they should be given the appropriate training and proper resources,” says Hartnett.

A recent report published by Inclusion Ireland also states that “providing supposedly ‘special’ places without the requisite experience and skill may make a bad situation worse.”

“The education system is failing the child with special needs. They are not setting them up with the opportunity to learn. They are just putting barriers in the way,” says Hartnett. “It’s heart-breaking and a national disgrace.”

Marguerite Wilson says the shame is that children with autism and special needs have such potential when they have access to the right education.

Jack was diagnosed with autism when he was three years old and, following three years at an early intervention school for children with autism, he was enrolled in a special class in a mainstream primary school in Douglas, in Cork.

Wilson had seen the positive impact the early intervention school has had on him.

“In those early days we had to work really hard with Jack to get him to say any words. He was almost locked in ...

“But today, he’s full of chat. He’s direct and a bit black and white – and maybe the world would be better if we were all like that ... He has a great sense of humour. He’s fantastic at drawing. He wants to be a palaeontologist. He educates me on a daily basis.”

Her experience in securing an appropriate education has taught her to be grateful.

“I have to accept what I am given. Everything is a fight,” says Wilson. “But I’ve been fighting for Jack since he was eighteen months old. I’m so sick of fighting. The system should be better. it should be easier.

Wilson continued to fight throughout the summer, contacting politicians and Tusla. She finally received a call in the last week of August from a post-primary school to say there was a place for Jack in a special class.

While the news came as a relief, it was bittersweet.

“I look at Jack now, starting secondary school, he’s scared and anxious. He has missed a whole year of socialisation with his peers,” says Wilson.

Permission denied: Why some secondary schools are not allowed to set up special classes

While some primary schools are being instructed by the Minister for Education to open special classes for children, some post-primary schools say they are not allowed to do.

Bandon Grammar School in Co Cork is one such school. In 2017, they had several students enrolled in their school with reports recommending they be enrolled in an ASD unit.

Following support and advice from the Special Education Support Services (SESS), principal Ian Coombes applied to the department to open an ASD unit in the school.

“It all went right through. We went to the training days in May of 2017 and then in July I got urgent message to say it was all a big mistake,” says Coombes.

“The unit was withdrawn. At that stage contracts had been issued to SNAs and teachers. The children and parents were terribly disappointed.”

When Coombes questioned the decision, he was told that the Department did not have a policy of supporting ASD units in fee-paying schools.

“They have ignored our offer of waiving the fees for students enrolled in the unit,” says Coombes

The school has six children enrolled that would benefit from access to an ASD unit. Their parents choose to remain with Bandon Grammar for several reasons.

“One of them doesn’t want to be taxied to another school 15km up the road. He wants to go to the same school as his sister,” says Coombes.

The school also serves a community of a Church of Ireland ethos. “[The parents] don’t have a school with a unit serving their ethos west of Cork City,” says Coombes.

Coombes stresses that the school does its best to support the learning needs of these students, but believes they deserve more.

“We don’t get the additional SNA support and resources that comes with a unit, to the detriment of the children.”