Removing RE will not turn students into ‘quantum mechanics experts’, says management body 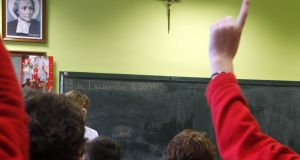 NCCA has proposed that religion be taken out of the core primary school curriculum.

Public consultations on the future makeup of the primary school curriculum should not be “obsessed” with religious education, a Catholic education group has said.

Seamus Mulconry, general secretary of the Catholic Primary Schools Management Association (CPSMA), said curriculum overload was an issue in primary schools but that simply abolishing religion was not the answer.

Mr Mulconry was responding to a proposal that religion be taken out of the core primary school curriculum. Under the proposals by the National Council for Curriculum and Assessment (NCCA) the core curriculum would comprise of a minimum of 60 per cent of the school day and deal with core subjects such as maths, Irish and English.

The remaining 40 per cent of the day would be designated as “flexible time” for roll call, assembly, breaks, discretionary curriculum time and the school patron’s programme. Schools would be free to use as much or as little of this for religious education as they wanted.

The NCCA said the proposals are intended to begin a discussion about the redevelopment of the primary curriculum. An initial consultation will run through spring next year.

“We don’t think any consultation should be obsessed with religion,” Mr Mulconry said. “We think there should be an objective appraisal of what the issues are and not simply a focus on one thing.”

He said there was a mistaken view that religion served little function and took away from more practical subjects.

“To be honest some of the commentary would suggest that if you were to remove religion from the curriculum you could basically turn out quantum mechanics experts in the next week. We need to be realistic about what’s going on here.”

He said religion is not simply “indoctrination” and that it teaches children about ethics and social issues such as homelessness and refugees.

“When there are discussions about ‘no room at the inn’ you can be fairly sure that people are learning about the real issues of homelessness.

“And when there is talk of refugees, that story is also the story of the infant Jesus who became a refugee.

“Religious education is transmitting a holistic world view with very sound values that underpin a lot of the stuff that is valuable in our society. When people are thinking of cutting it down or dumping it they need to do some serious, serious thinking.”

The CPSMA provides advice to 2,800 schools and negotiates with the Department of Education on their behalf.

Mr Mulconry said it is a mistake for the consultation to start with “preconceived ideas” on the role of religious education.

“In my own experience of public consultation, one of the biggest mistakes you can make is [to] come up with the answers and then do the consultation. If you really listen to what people are saying you tend to get a much better result. It’s much more solid and people are more willing to go with it.”

David Quinn, the director of the Christian think-tank the Iona Institute, said the proposals show “a certain hostility” by the NCCA to denominational schools.

“It’s hard to read it any other way. Because if you combine it with the push for ERB and Ethics [a religious education syllabus which doesn’t focus on any one faith], for which there was no evidence of any real public demand, and now they want to see religious education dropped as a core part of the curriculum.

“It defeats the purpose really of having a faith-based school if they can’t have religious education as part of the core curriculum,” Mr Quinn said.

Mr Quinn also said the proposals appear to go back on an agreement between the Department of Education and religious schools in the mid-1990s that stated religious education would be part of the core curriculum.