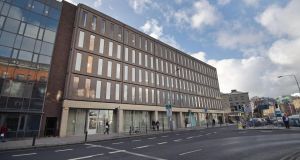 Trinity College Dublin (TCD) has received a major boost in its bid to address the student accommodation crisis in the capital.

This follows Dublin City Council giving the go-ahead for a €50m development for student accommodation on the city centre campus.

In the plan, TCD will demolish the existing five-storey Oisín House, which has been in use by the Department of Social Protection and its predecessor on Dublin’s Pearse Street for over 20 years.

In its place, the college will construct a six storey, 12,110 sq metre scheme that would have accommodation for 250 student accommodation units.

The new plan is a scaled down version of a proposal refused by An Bord Pleanala in July.

That plan - which was opposed by An Taisce - comprised of a seven-storey, 13,800-sq scheme that would have housed 278 student accommodation units.

The unsuccessful application was described by one Trinity alumna, Dr Kate Yeaton in an objection lodged with Dublin City Council as a “monstrosity”.

However, the new plan has attracted no opposition while the City Council has given the grant for a large scale plan in six weeks.

The planner’s report into the application stated that the “design and concept of the proposal has been previously approved by the City Council and with the reduction in height, mass and bulk and associated alterations to the roof profile will allow the new building to successfully integrate and be a more accepted edition to the built environment”.

The planner stated: “The new building is therefore unlikely to have a negative visual impact on the streetscape or on historic buildings within the campus and on the adjoining Printing House in particular.

The report adds: “Further, the Planning Authority are satisfied with the high quality design and innovation of the scheme and recognise that the Design Team are responsible for designing 2 other statement buildings within the college campus, including Trinity Long Room Hub (award winning) and the library extension fronting Nassau Street.”

The report concludes: “Overall, it is not considered that the proposed development will have an undue negative visual impact on the setting of the protected structure or on the Conservation Area, and subject to condition, would be in accordance with the proper planning and sustainable development of the area.”

The college is to pay €330,585 to the Council in development contributions attached to the scheme.