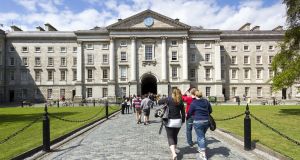 Irish universities such as Trinity College Dublin have slipped in international rankings. It is “unwise and undesirable to give the league tables so much weight”, said the Hepi report. Photograph: iStock

Governments and colleges should ignore international university rankings because they are flawed and unreliable, according to an analysis by a UK higher education think-tank.

Global rankings tables by organisations such as the Times Higher Education and QS World University Rankings are highly influential and prompt universities to alter their policies to improve their positions, a report by the Higher Education Policy Institute (Hepi) states.

Hepi’s research indicates the data that league tables use are “unreliable and sometimes worse” and it is “unwise and undesirable to give the league tables so much weight”.

The decline of Ireland’s top universities in recent years has contributed to mounting concern over the international standing of the sector.

Bahram Bekhradnia, president of Hepi and a board member of Ireland’s Higher Education Authority, said the evidence shows rankings measure research activity to the exclusion of almost everything else such as quality of tuition.

“They do not match the claims made for them. They fail to identify the ‘best’ universities in the world, given the numerous functions universities fulfil that do not feature in the ranking. Indeed, what is arguably their most important activity – educating students – is omitted,” he writes.

He said universities, their governing bodies and governments should “focus on their core functions because it is the right thing to do, not because it may improve their position in any rankings”.

The report makes a number of proposals aimed at enhancing league the tables. They include a requirement that ranking bodies should audit and validate data provided by universities, and that league table criteria should move beyond research-related measures.

It also says surveys of reputation should be dropped, given their methodological flaws.

It calls for league table results to be published in more complex ways than simple numerical rankings.

The report also finds that, due to the commercial interest in maintaining rankings, there is little possibility of halting their rise.

The institute finds there may be universities that submit erroneous data, deliberately or accidentally.

“There can be no confidence in the accuracy of their data nor whether the data are produced to common definitions and standards,” the report states.

In addition, there is “no effective attempt by the compilers of rankings to audit or assure the quality of the data that are submitted”.

Earlier this year, the new chairman of Ireland’s Higher Education Authority said Ireland’s top colleges should not place their strategic focus on trying to rise up international university league tables.

Michael Horgan, a former chief executive of the Royal College of Surgeons in Ireland, said universities should instead focus on maximising the potential of existing programmes.

He said research indicated that funding alone was the single biggest factor behind universities which perform well in global league tables.

“At the moment we invest about €1.1 billion into third level education – it is the equivalent of a relatively small US college,” he told members of the Joint Oireachtas Committee on Education.