CAO 2017: Points down for nursing, teaching and engineering 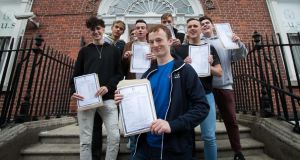 Nursing, teaching and engineering have recorded some of the significant drops in this year’s CAO points.

They are among hundreds of courses where points are down due a combination of fewer applicants and reforms to exam grading and the CAO points system.

Although points have fallen for a majority of courses, academics say the difference from last year is not major and that variations are within what might be expected in any normal year.

When broken down by the top 30 popular courses, however, the points have fallen rather than risen by a ratio of two to one.

Some of the most significant points reductions are evident across nursing programmes, particularly in areas such as psychiatric and intellectual disability, with drops of between 20 and 50 points.

While a fall in applicants for nursing is a factor, a Department of Health decision to restore places removed during austerity-era cuts is likely to have had a bigger impact on falling points requirements.

Teaching also sees small reductions in points across most programmes at second level and, to a lesser extent, at primary level. The drop is sharpest in more specialised and lower-intake courses.

The biggest drop, for example, is home economics with Irish in St Angela’s, which is down 36 to 409 points.

Engineering and science are also down, in a move likely to alarm policy-makers given high-profile attempts to attract school-leavers to Stem (science, technology, engineering and maths) areas.

While engineering is likely to be down as a result of fewer applications, an increase in minimum entry requirements in maths across many courses may also have impacted on a drop in points.

Under the old system, for example, a candidate needed a minimum of 55 per cent in higher maths to secure an engineering place. This has been raised to 60 per cent (a H4) under the grading and points system.

Science is down across a number of universities such as Maynooth, Trinity, UCD and DCU by anything by between five and 20 points.

However, more specialised science courses, especially in physics, seem to be gaining in popularity.

Points for many business courses are up slightly, such as commerce at UCD, BESS at Trinity and commerce at NUI Galway by between five and 10 points. DCU’s global business (transatlantic) degree remains one of the highest points requirements for a business degree course (574), even though it is down by 16 points.

Commerce degrees with a language fell across the board, which will be a concern to policy-makers who have been trying to encourage more students to study European languages.

This year’s Leaving Cert students were the first to face a new grading system, which replaced the old 14-point grading system (A1s, B2s, C3s and so on) with just eight grade bands ranging from one through to eight at both ordinary and higher level.

In addition, there is a new CAO points system which provides proportionately more points for high achievers,

A stated incentive for the change was to take the heat out of the points race, so that fewer students miss out on a course by just five points, or because of random selection.

On Monday’s evidence, it does appear to have had some effect, with points down for over 50 per cent of courses.

By contrast, the pattern was reversed for ordinary degree/higher certificate (level six and seven).

Points increased for almost half of these courses, while they fell for 38 per cent of them. The remainder stayed at the same level.

Some academics suggest this may be due to the fact that institutes of technology offered fewer places at this level this year.

They appear to have made about 1,000 extra offers for places at honours degree (level eight) this year, and about 500 fewer at ordinary degree/higher certificate (level six and seven), say sources.