Boys don’t try? Why so many male students are falling behind at school

Research says working class boys are falling behind because of a fear of failure. What can we do to solve it? 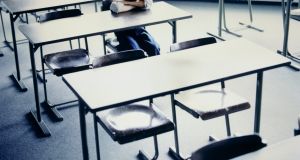 A gender gap in educational attainment means boys get lower exam results than girls, are more likely to drop out, and are less likely to go to university than their female counterparts.

The language is alarming for parents and teachers of boys. We hear of “a crisis in masculinity” in schools and about how “failing boys” are not reaching their academic potential.

A gender gap in educational attainment means boys get lower exam results than girls, are more likely to drop out, and are less likely to go to university than their female counterparts.

This year – again – girls outperformed boys in the Leaving and Junior Cert. They sat more higher level papers and got more H1 grades overall. Academic studies show boys are underachieving, in all stages of education, from preschool – where boys lag behind in language and communication - up to college.

Still, they do better in exams in the maths and sciences, and males dominate the numbers entering university to study these subjects.

So is there really a crisis? Or some kind of moral panic? Why are boys falling behind? And what can we do to help them achieve more?

Professor Emer Smyth, head of the social research division at the ESRI, says it’s not a crisis for all boys – the key question to ask is: “which boys?”

“We’ve seen a shift in the gender gap over the last few decades from where it was the male students who went to university, to the females more likely to do so. That gap is now in favour of girls, in a number of domains. It’s not huge,” she says.

“But which boys are affected? It’s really the working-class boys who experience the most difficulties. Working-class boys are more likely to get caught up in a negative dynamic of acting out and being reprimanded and then becoming disengaged.”

To say it’s a crisis for all boys is not the case, she says.

“There are groups of boys doing very well out of the education system. In fact, even in the working-class boys group, there has been a narrowing of the gap – for example, in relation to early school-leaving. It’s not a black and white picture.”

In her research on why girls “do better” than boys, Smyth found unconscious gender stereotyping may play a role.

Teachers were more likely to have lower expectations for boys, and to see them as “underachievers”.

A “good student” is seen as a compliant one, with boys more frequently sanctioned and girls spending more time on homework.

In this way, has academic success been feminised, to the detriment of boys’ achievements?

Smyth is not so sure: “British studies attribute the gender gap to ‘laddishness’ – as in, the main issue is boys don’t want to be mocked for being swots and that’s why they’re not investing. In Ireland, we found that wasn’t really the case: young fellas who were disengaged were admiring of others doing well, with a kind of: ‘Fair play to them, but it’s not for me’ attitude.”

In their new book, Boys Don’t Try? Rethinking Masculinity in Schools, teachers Matt Pinkett and Mark Roberts examine the research and drill down to a core conclusion: boys are not hitting their heights because of a fear of failure.

Fear of failure, they write, is a deep psychological threat that can lead to self-sabotage: the person’s motivation to avoid it exceeds their motivation to succeed. It is essentially a fear of shame, a paralysing emotion.

Pinkett and Roberts find failure can be a protection strategy for boys. They write: “This is a paradox that many experienced teachers will recognise. Only by guaranteeing failure – through a palpable, public effort – can boys avoid a more damaging brand of failure. Through not trying their hardest, pupils avoid injury to their perception of self.

“To the fragile, male, adolescent, mindset, trying hard and still failing is the worst of both worlds. Research suggests boys are more likely than girls to self-sabotage their academic outcomes in an effort to protect their sense of self-esteem.”

The situation is worsened by what the authors call the “engagement myth” that boys like competition, leading teachers to make activities competitive so male students are more motivated to learn.

“The reasoning behind this is catastrophically wrong. Rather than encouraging boys on to greater efforts, this tactic has the opposite effect. Particularly for the very boys who are most in need of a confidence boost,” they write. So, competition is good, but it shouldn’t be the focus.

Patrick McCormack, principal of St Paul’s CBS secondary school in North Brunswick Street in Dublin - better known as “The Brunner” - says it is a valid point.

“If we mask this fear with the bravura of ‘not trying,’ it allows us to hide our vulnerabilities and provide an excuse for underachieving.

“If, as educators, we can name, acknowledge and seek to manage such fears in ourselves, perhaps we would be better equipped to help students. It might lead to better academic outcomes and developing a positive sense of self.”

McCormack believes helping students see the value of education is key to motivation.

“Learning in a home and school environment where the benefit of academic work is encouraged and a work ethic is valued gives students the confidence that comes with the expectation to do better; to achieve.

“If we can encourage boys to really value formal education, help them see it for themselves, it goes a long way to helping them to meaningfully engage and embrace it.”

He is a strong believer in the school’s role in adding to a student’s “cultural capital” – the idea that we accumulate certain knowledge valued in society that gives us cultural competence and determines our social status.

The head of “The Brunner” is optimistic. He says there is a degree of under-performance in boys, but this does not mean they are no longer achieving.

“We are seeing a shift upwards for boys, the Deis initiative has improved resources into schools, the number of early school-leavers is dropping and the value of education is rising.”

So how do we endeavour to get the best from boys?

1. Failure is good: Help them to learn failure is not a shame, but something of a right of passage and that determination is a sign of strength.

3. Tackle social class: The poorest outcomes are for working class boys, so gender and social equity must be seen as interrelated.

4. Question ‘engagement myths’: Using contests to motivate boys to learn can backfire as they will generally elevate the confident students and isolate the less-confident ones who are most in need of a boost.

5. Boost their ‘cultural capital’: It might be tempting to get boys in a sports-mad school to write essays about big match finals, but it can be better to open up students’ minds to the world and help them find interests and passions they may never have known of.

6. Check your unconscious bias: Teachers can view boys as underachievers and girls as being more compliant. Such binary thinking is unhelpful for both.

7. Positive climate: Try a variety of teaching methods with active involvement from students and move away from punitive discipline into a more positive school climate.

8 No gimmicks: Final word of advice goes to authors Pinkett and Roberts: “Teach boys exactly the same way you teach girls. No gimmicks. No shortcuts.”