While the recession threatened the future of some schools, enrolment levels have bounced back to boom-time highs 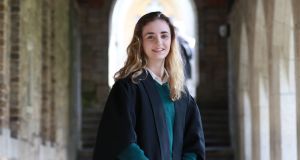 Nicole Dickerson, a sixth-year boarding student at St Columba’s in Dublin. “There is a great support system here because we are surrounded by friends,” she says. Photograph Nick Bradshaw

Not so long ago, things were looking bleak for boarding schools: student numbers were falling, Government funding for private education was being cut and many faced an uncertain future.

Some contemplated shutting their doors altogether, while a few opted to axe their day-pupil fees and join the free education scheme.

But today, against the backdrop of a growing economy, boarding schools are enjoying a resurgence in popularity.

The growth in two-income families – where both parents work – seems to be one key driver.

Another is the changing perception of modern boarding life, with most schools now offering a range of boarding options which allow children more regular contact with their parents.

St Columba’s College in Whitechurch, Dublin, is the most expensive boarding school in the State, with fees of up to €22,797 for senior boarders. Its numbers have grown strongly in recent times.

Mark Boobbyer, the school’s principal, says busy parents see it makes sense to ensure their children’s academic and sporting needs are met, while giving them the kind of structure they might not have at home.

“These are parents who may be struggling to get home in the evenings or rushing around on a Saturday taking them to hockey practice or music . . . when they see they can get all that under one roof, there’s a lot to be said for it,” he says,

Boarding schools have, in many ways, struggled to get past the perception of them as bleak institutions rooted in the the past.

Parents’ confidence has doubtless been shaken by broader child-protection scandals and the question of whether they are appropriate places for young people to grow up.

“If you spend any time in a modern boarding school, you’ll see they are very modern and fantastic places for kids to grow up.

“I’m not saying they always were but boarding schools have transformed over the last 10 or 20 years or more. They have strong child-protection safeguards, because they have to; the level of pastoral care is outstanding,” he adds.

It is also no longer the case that parents do not see their children from one end of term to the other.

Many board for five days a week, while those who board for seven days often see their parents on Sundays. Smartphones, Boobbyer says, for all their ills, also offer children the chance to communicate regularly with their parents.

There’s no doubt the economic downturn hit boarding schools hard, but many say they are back towards boom-time enrolment levels.

Alexandra College for girls in Dublin – where seven-day boarding costs €17,891 – says numbers fell to an unprecedented low in 2009, right in the teeth of the recession.

They have recovered since, says principal Barbara Ennis, and numbers are continuing to rise.

The growth, she says, is due partly to the recovering economy but also because parents see the value of having a study regime in place, as well as access to art, music, drama and sport.

“This all-rounded education is what parents mention to me as key reasons for choosing boarding school for their children,” she says.

“Also, because girls develop independence at an early age, this helps them to develop a strong sense of sisterhood – knowing that women can do or be whatever they want.”

Many traditional boarding schools are now offering a range of more affordable options such as day boarding, where pupils have their meals and supervised study, but return home at night.

Glenstal Abbey in Co Limerick, for example, has recorded its largest enrolment in its 80-year history since introducing this option, which costs €11,550 compared to €19,300 for seven-day boarding.

Clongowes Wood College, which has been accommodating boys since 1814, has also seen its numbers climb to 450 students, the highest in more than 200 years.

It offers seven-day boarding only, with extended weekend breaks every month. Headmaster Chris Lumb says demand from Irish families both here and abroad, as well as international families, means it is set to grow further.

“A further development of facilities is planned for this summer which will both enhance boarding accommodation for the younger years in the school, and increase capacity.

“I sense that the recovering economy is having an effect on schools across the fee-paying sector, including those offering boarding, though thankfully Clongowes came through the recession relatively unscathed.”

Again, Lumb sees signs of a bigger shift, with busy families putting a greater value on personal and spiritual development.

“Our families value this breadth of opportunity we give to their sons,” he says. “They appreciate that in our unique seven-day boarding environment, the approach to learning does not finish at the end of the ‘normal’ school day – teaching and learning permeates the evenings and weekends.”

The fine sentiments of principals is one thing – but what do students make of boarding school?

“I know if I was at home I would struggle to be disciplined enough to study every evening,” says the 17-year-old.

While there are negative sides to boarding school life, he says they are outweighed by positives.

“Starting off can be hard, with homesickness part of the experience,” says O’Donnell.

“And there’s no getting away from the fact there are rules to be followed. We are a school of 450 boys so rules are a part of life. But it’s all worth it once you fully settle in to boarding life.

“My classmates were really great in supporting me when I was homesick – that is the kind of ethos here in Clongowes, we all help each other out – we’re like brothers.”

If anything, he says, boarding has improved his relationship with his family.

“The day-to-day stress parents have when trying to ‘make us study’ is taken out of the equation, so the time we spend with them is quality free time without the shadow of school work not yet done,” he says.

“I am really grateful to my parents for the opportunity to have the experience of boarding – it’s been great fun and as I face into my final year in September I will be sorry to be leaving.”

Boarding life: ‘I believe the strict routine will keep me on track’

Nicole Dickerson from Co Clare attends St Columba’s College; she feels living away from home is a very big step towards independence.

“I don’t believe I would be who I am today if I hadn’t come here,” says the 18-year-old. “Of course it was a struggle being away from my parents at the beginning, but being independent from them has really helped me to grow.

“The school has a very study-focused atmosphere, so everyone really performs at their best in State exams.

“And although we all get very tired as we are on the go all the time – including classes on Saturday – I believe the strict routine will be good later on to keep me on track with everything.

“There is a great support system here because we are surrounded by friends who are all doing the same things.”

How much seven-day boarding costs

* Figures based on schools which provide seven-day boarding. Figures quoted are based on latest available