National College of Ireland looks to double computer and IT courses 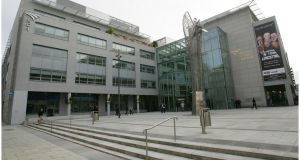 The National College of Ireland campus: that campus, based in the IFSC, has reached maximum capacity. Photograph: Bryan O’Brien

The National College of Ireland (NCI) is looking to secure Government funding to build a second campus in Dublin city centre.

The college wants to double its spaces in computer and IT courses to address a skills shortage in the capital’s financial and tech sectors. NCI is seeking to purchase land near the IFSC and develop a multimillion 10,000sq m campus to take on 1,500 new students in the short-term.

The college’s president, Gina Quinn, met Minister for Education Richard Bruton on February 16th to lobby for State funding for the plans. The department confirmed that a proposal for part-funding of the expansive project has been submitted by NCI and “is currently being assessed”.

NCI has 5,000 students and is a private, non-profit college, which mainly runs business and computer diploma and degree courses. The current campus, based in the IFSC, has reached maximum capacity, and the number of students entering higher education in the next five years is set to grow considerably.

“Looking at the demographics, we will need more space,” Ms Quinn said. She said there is a need for more computing graduates among the large multinational finance and IT firms in the city centre. The college’s courses in “data analytics, cybersecurity, and cloud computing, are really, really in high demand”.

The college is believed to be considering purchasing a vacant site near Castleforbes Road and Spencer Dock, a five-minute walk from its existing campus in the IFSC.

Dublin City Council chief executive Owen Keegan suggested the college look at nearby Nama-owed sites in the immediate area, which includes 25 properties, according to correspondence between the city council chief and NCI obtained under the Freedom of Information (FoI) act. However, the college is looking to purchase vacant land and develop it rather than refurbish an existing property.

NCI deputy president John McGarrigle said the project would take at least three years to complete after it secures an appropriate site. The second campus will be funded through internal resources, fundraising and philanthropy from industry, and a loan from the European Investment Bank. The college has increased its internal revenue substantially by expanding postgraduate courses and attracting more international students, who pay higher fees of up to €14,500 a year.

Mr Burton was “extremely supportive” of the NCI’s plans to expand its financial apprenticeship courses, said Ms Quinn. Their financial apprenticeship courses, which partner students with large finance firms in the IFSC, would be increased if the second campus plans went ahead. “NCI has a good reputation among Government, and is seen as genuinely delivering on the skills shortage in the STEM area and IT courses,” Ms Quinn said.

The department was considering the college’s request for funding “within the context of the many competing demands on the capital budget for higher education”, a spokeswoman said.