Ask Brian: Should my children drop their weak subjects?

Be careful: some third-level courses have minimum subject entry requirements 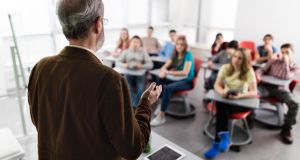 Students should be mindful that some third-level courses have minimum subject entry requirements. Photo: iStock

Question: Two of my children are currently selecting subjects for both the Junior and Leaving Cert. My daughter, who’s in transition year, is considering a career in primary school teaching and is resisting taking a science subject. My son in first year, on the other hand, excels in science and wants to drop both French and German. What is in their best long-term interest?

Answer: Over 100,000 students and their parents are currently grappling with these issues. No student wants to find themselves excluded from a third-level course they desire on the basis that they lack a subject which is an entry requirement.

There is a feature on the Qualifax website (www.qualifax.ie) – “minimum subject entry requirements” – which allows you to identify whether a specific Leaving Cert subject is a minimum entry requirement on every single course offered by Irish colleges.

If your daughter therefore wants to train as a primary school teacher in the State, she will require a minimum of a H5 grade in Irish. This means she must study Irish at higher level. Qualifax indicates that 23 courses have this requirement.

Regarding her lack of interest in taking a science subject, it is common practice for schools to advise students to retain a science subject in their Leaving Cert, as more than 200 CAO courses require you to have taken and successfully passed a science subject There are just over 1,100 programmes which do not have this requirement.

Some courses require a specific science subject. Pharmacy in Trinity, UCC, and RCSI require chemistry, as do medicine and dentistry in UCC, veterinary in UCD and human nutrition and dietetics at DIT.

All this information is available at the click of a mouse online – no student currently selecting school subjects should finalise their choices without informing themselves of the implications of dropping specific subjects.

Regarding your son, who struggles with languages, there are both positives and negatives associated with dropping these subjects.

At third level, several faculties in science and engineering have dropped the third language requirement in recent years. This year, Maynooth University has dropped the requirement for its business faculty courses.

There are still more than 160 CAO courses which require a third language in arts, social science, commerce, pharmacy, veterinary medicine faculties among others. However, almost 1,200 programmes have no such requirement.

If he wants to study a science degree programme in four years’ time, not having French or German as offered in his school will not block him.

There is no point in putting any student through the torture of taking a subject for five more years that they will struggle with every day, particularly if they will not need it to progress to third level.

Conversely, Ireland is a member of the European Union. Among young people across the union, the ability to converse in three or four EU languages is common place.

Our economic future is now inexorably linked to Europe and speaking their languages is central to enhancing our economic growth and development.