Are arts degrees past their sell-by date? 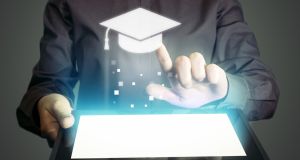 This week a number of major reports confirmed what most recent arts graduates could probably have told you without the need for costly research: they earn less than other students in the years after college.

The draft findings of a Central Statistics Office study, which tracked the earnings of thousands of young college graduates over a five-year period, found that IT and computers students earned most.

The findings echoed new research by the Higher Education Authority which found newly graduated students from 2016 with degrees in arts were least well paid – with 15 per cent earning less than €13,000.

In the same week came news that the Government is reforming the way it funds higher education, with new incentives to help colleges deliver Stem (science, technology, maths and engineering courses).

Minister for Education Richard Bruton said the move was aimed at meeting a key national priority of increasing the uptake of Stem subjects at third level and plugging projected skills gaps across the labour force.

For policy-makers, the message seems clear: Stem is key if our graduates are to compete in the global war for talent.

The message has also been drummed into school leavers in recent times: science is cool, sexy and the future.

Little wonder, then, that points for many science courses have shot up over over recent years, while points for arts courses have fallen as students – and their parents – seem to question the value of the degrees. So, are arts degrees finally past their sell-by date?

Despite the perception of poor job prospects, Tony Donohue, head of education and social policy at employers’ group Ibec, says short-term salary trends shouldn’t be used to question the value of arts and humanities degrees.

“Arts graduates may take longer to get there, but when they do, they reach senior positions within organisations,” he says.

“Given the way the 21st century workplace is evolving, we should be equipping students to enjoy rewarding employment and fulfilling lives in a future environment whose demands we can neither anticipate nor predict. Arts and humanities courses do this very well.

Arts and humanities graduates have an ability to deal with complexity, to look at things in a different way. They also have a higher tolerance for ambiguity, which is important

“They develop the capacities to think critically, communicate effectively, observe carefully and to make connections between disparate sources of information.”

Financial services firms and consultancy firms say they are increasingly attracted to hiring arts graduates who, they find, can be better at problem-solving and communicating than numbers-obsessed graduates.

Terry Neill, who headed up Accenture’s global change management practice for a decade, says he had an epiphany during the firm’s search for the most talented recruits.

“I realised that most of the world’s challenges are around people. Most of the decisions we take are emotional, and then we look for facts to back them up . . . We need rounded human beings.

“So, when young people join Accenture or the big professional firms, yes, we look for number-crunchers, but more and more we’re focusing on arts and humanities graduates because of their ability to deal with complexity, to look at things in a different way. They also have a higher tolerance for ambiguity, which is important.”

Key Capital, which provides investment advice to wealthy clients, is one of many financial services firms which looks towards arts and humanities for answers.

“We get the most value when technology, science and arts guys collide,” says Conor Kileen, chair of Key Capital. “We encourage people to speak up, because we get the benefit of that diversity.”

If there is a problem, says Terry Neill, it’s that the arts and humanities tend to lack confidence about themselves.

“They need to engage the with public policy agenda and to state how and why we need to think about arts in the future.”

Ibec’s Tony Donohoe agrees, and adds that graduates themselves are not always aware of the skills they have developed.

“A major failing within the system is that arts graduates are not given the support to understand how their degrees translate into real, valuable skills and to communicate this to employers. This is the responsibility of academics across all disciplines,” he says.

For all the navel-gazing over the arts, the irony – say advocates – is that it is one area best-positioned to cope with the challenges due to be thrown at us in future, such as automation and robotics.

At the World Economic Forum at Davos next week, leaders will gather to discuss how we are on the brink of a technological revolution that is set to fundamentally alter the way we live and work.

Based on interviews with chief human resources officers, it forecasts that the skills likely to be in most demand over the coming years will include complex problem-solving, critical thinking, creativity, people management, co-ordinating with others and emotional intelligence.

Prof Jane Ohlmeyer, director of the Trinity Long Room Hub and the Erasmus Smith’s professor of modern history at Trinity, says these are the skills being fostered in arts and humanities courses.

“In the arts and humanities – disciplines that include everything from classics to cultural studies and ecumenics to English – we educate our students to think critically, to ask awkward questions, to challenge orthodoxies and to explore what is distinctive about Irish, European and global history and culture,” she says.

“Skills such as creativity and an ability to think strategically ensure our graduates will be well-equipped to compete with the advanced robotic and automated work practices of the future.”

While there is resentment in some quarters at how Stem dominates public policy and research funding, Prof Ohlmeyer says arts and Stem subjects should not be an “either, or”.

“I don’t see it as a binary: it’s an eco- system and you need physics and philosophy to thrive. The system needs to be balanced. It’s naive to think that simply investing in Stem will solve any of our challenges. We need to invest across the board.”

A challenge remains: the public perception that it is difficult to carve a career out of the arts

Dr Fionnuala Dillane, UCD’s associate dean for arts and humanities, agrees that setting up arts against Stem subjects is redundant.

“This is not a two-culture world with science versus literature. I teach a course on literature and science and those debates took over in the 1920s as we became more industrialised. They were put in opposition to each other, but that argument was skewered a long time ago.

“Stem is attractive and it should be. It’s exhilarating to see what students are doing at the Young Scientist.

“I’d like to see social sciences, arts and humanities in that environment. The onus is on us to to do that. I don’t want to create a victim status for the arts. Thousands of students choose us as their first choice.”

A challenge remains, however: the public perception that it is difficult to carve a career out of the arts.

There’s no shortages of jibes, either, like this old one: science students spend their careers asking “why does it work?”; engineering graduates ponder “how does it work?”; while arts graduates, ask : “do you want fries with that?”

Universities are responding by shaking up their arts courses and adding a greater emphasis on employment opportunities through internships, research or study-abroad options.

UCD, which has run the biggest arts course in Ireland, is changing its BA (Bachelor of Arts) into a suite of different BA and BSc (Bachelor of Science) degrees.

Along with the traditional three-year BA arts degree, it is introducing four-year degrees in humanities as well as modern languages.

There will also be a four-year BSc in social sciences, as well as separate degrees in economics and psychology. Some of these will have internships, research or study-abroad options.

In the arts you get subject knowledge, you develop analytical, creative and critical thinking

Dillane says the changes are aimed at providing more flexible options for students, as well as “future-proofing” them.

While we don’t know what jobs will be around in 20 or 30 years time, she says, flexibility will be key.

“In the arts you get subject knowledge, you develop analytical, creative and critical thinking.

“As a result of these multiple subjects, you have a dynamic flexibility because you can work across a range of disciplines.”

Whatever about the future, even now arts graduates tend to go in all manner of directions. Dillane points to the diverse career paths of its recent BA history graduates.

“We had a community archivist, a political researcher, a publisher, a heritage adviser, speech writer,” she says, listing a long and varied roll-call of jobs.

Maynooth, DCU, UCC and UL have also made changes to their humanities programmes in recent times, while Trinity College is engaged in a comprehensive review of its arts degree.

For Ibec’s Tony Donohoe, much of the public misunderstanding over the arts is down to not always seeing the link between sometimes esoteric areas of study and their value in the workplace.

Employers, however, increasingly do.

“It may not be intrinsically valuable to understand the details regarding the history of the enlightenment or the philosophy of Aristotle, but the academic study of these subjects forces the student to analyse ideas, differing view points, justifications, opinions, and accounts,” says Donohoe.

“In the course of study, the student must then construct a logical assessment of the issue and defend their conclusions with facts and lucid arguments. These are very valuable – and very rare – skills in the work place.”