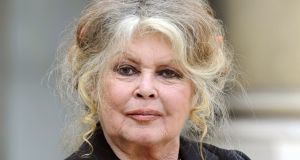 French actor Brigitte Bardot expressed regret that the global debate sparked by allegations against US producer Harvey Weinstein was “taking the place of important issues that could be discussed”. File photograph: Eric Feferberg/AFP/Getty Images

The film star Brigitte Bardot has called female actors who denounce film producers for sexual harassment “hypocritical nobodies” and “teases” who use sex to obtain roles.

“There are lots of actors who are teases with producers so they can get roles,” Bardot told Paris Match magazine in an eight-page spread promoting her new book, Tears of Battle, about her fight for animal rights.

“Then, so that people will talk about them, they go around saying they were sexually harassed. In reality, it hurts them more than it helps them.”

Bardot expressed regret that the global debate sparked by allegations of rape and sexual harassment against the US producer Harvey Weinstein was “taking the place of important issues that could be discussed”.

The woman who was described as a “sex kitten” after starring in the 1956 film And God Created Woman says she “was never the victim of sexual harassment. I found it charming when men told me I was beautiful or that I had a pretty little ass. That sort of compliment is nice”.

Bardot, aged 83, stopped making films at 38 to devote herself to animal rights. The foundation that bears her name is 30 years old.

Bardot sold her houses and most of her belongings, including the wedding dress from her first marriage to director Roger Vadim and jewels from her third husband, the German millionaire Gunter Sachs, to finance her foundation, which campaigns for animal protection. Royalties from her book will to the same cause.

“I gave my youth and beauty to men. Now I give my wisdom and experience to animals,” Bardot said when she auctioned her heirlooms.

Bardot says her fourth husband, Bernard d’Ormale, “accepts three or four animals sleeping on our big bed. If he refused he would not be my companion”. The couple live in Saint-Tropez with nine dogs and six cats. She keeps another 50 animals at a farm nearby, including a pony, a donkey, “seven pigs, eight goats, sheep, rams, a tortoise, geese, ducks, chickens, 17 dogs and cats”.

Bardot has often expressed controversial political opinions. She supported Jean-Marie Le Pen, the founder of the extreme right-wing Front National, and was convicted five times of inciting racial hatred through statements against Muslims.

Bardot attended Catholic schools. “I don’t believe in Mass, in priests and the hierarchy of the Catholic Church, but I speak directly to the Holy Virgin,” she told Paris Match. “I call her ‘my little Virgin’.”