All schools to reopen today after closures over structural concerns 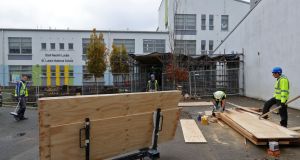 All schools which were ordered to close since structural concerns were first flagged more than two weeks ago are due to be open on Friday.

St Luke’s National School in Tyrrelstown – the last school to reopen – has had extensive remedial works to reinforce walls and windows on the building.

School principal Vivienne Bourke said the school’s patron body and board of management were satisfied that the ground floor is safe for pupils to return. This follows updated certification from engineers and health safety consultants.

Younger classes will be accommodated in classrooms and the school hall, while older children will be walked to Le Chéile secondary school nearby.

Extra works such as meshing around scaffolding and padding on pillars have been added to the building following concerns from parents over risks caused by the repairs.

However, some parents of pupils are still refusing to send their children back to class over safety fears.

A small group of parents protested outside the school gates on Thursday with placards such as “children come first”.

Debbie Solinas, who has three children with additional needs at St Luke’s, said she still feared for her children’s wellbeing.

“None of my children will be attending school until this is resolved. My children’s safety comes first,” she said.

“There’s dust everywhere and they cannot breathe. They want one of my children with additional needs to attend a classroom with 100 other children, in a hall. There are children with auditory problems and there’s no way that will work.”

Gillian Doyle, who also has three children at the school, said parents were still unsure whether the building would be safe and appropriate for small children.

“We want answers when they’re going to be in a safe building. Are they going to make up the days they’re missing? Will the building be safe enough for them? We haven’t had those answers,” she said.

Meanwhile, hundreds of pupils in other local schools affected by structural concerns returned to classes on Thursday.

Tyrrelstown Educate Together national school partially reopened after its board of management said it was satisfied that internal alterations to the school were safe.

Similarly, younger pupils have been accommodated on the ground floor of the building which has been strengthened by scaffolding and window braces.

Fleets of buses have transported older children to other schools in the area which are accommodating the children on a temporary basis.

Both schools are among 42 built by Northern Ireland building firm Western Building Systems which have undergone structural assessments in recent weeks. A total of 22 schools have required various forms of temporary remedial and safety work. Only one school building at Ardgillan Community College will remain fully closed, though the school says it will be able to accommodate all the children affected.