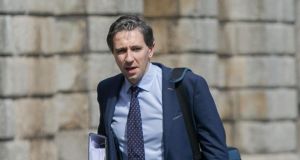 Young asylum seekers no longer have to spend three years in the Irish school system in order to qualify for educational support at third level, the Government will announce.

The latest revision to the student grant scheme for young people in direct provision, to be announced today, means asylum seekers will no longer need to have completed the Leaving Cert or have spent three years in an Irish school to be able to apply for a student grant when moving into third level.

Applicants will still need to have been resident in Ireland for a combined period of three years in order to apply for the support. They must also have already been accepted on to an approved post-Leaving Certificate course or undergraduate course.

Students who have applied for refugee status, subsidiary protection or leave to remain, and have been in the system for at least three years, can apply for the support.

Mr Harris said the new scheme would be put on a “more long-term footing” and that he hoped relaxing the criteria would result in more people accessing third-level education.

“I am acutely aware of the stress that students feel at this time and I hope that the changes that I’ve approved will address the fears of prospective applicants,” he said.

The pilot student support scheme began in 2015 but was only open to students who had been studying in an Irish school for at least five years.

In June 2019 this period was reduced to three years as it was found five years was “too restrictive”. At the time, just six of the 59 students who applied during the three previous years had been granted support, according to data from the Irish Refugee Council.

Asylum seekers are not entitled to free third-level education and are treated as international students who must pay fees.

Some Irish universities have introduced scholarships in recent years to support students going through the asylum process in moving on to third-level education. However, a university education remains financially inaccessible to most in the asylum system.

Applications for the support scheme will open today and can be made until November 6th.

The more than 60,000 students who were due to sit their Leaving Cert in June will receive the results of their predicated grades on September 7th, several weeks later than when the results normally come out. Central Applications Office offers for college places will be issued on Friday, September 11th.