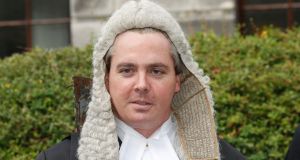 Remy Farrell SC: the specialist in white-collar crime told the Bar Council annual conference at the weekend it was a “scandal” that investigators were “at breaking point”, with lack of investment enabling large-scale fraud to go undetected. Photograph: Collins Courts

The State’s regulatory agencies are so stretched by an “endemic” lack of resources that many reports of white-collar crime are not even being read by the authorities.

Remy Farrell SC said it was a “scandal” that investigators were “at breaking point”, with lack of investment enabling large-scale fraud to go undetected and costing the State millions in lost revenue.

He said raising penalties was “the lazy way for the political classes to give the appearance of doing something” but that these increases were “absolutely irrelevant” when detection rates were so low.

Speaking at the Bar Council’s annual conference, Mr Farrell said the Garda Bureau of Fraud Investigation had been “swamped” with reports of alleged white-collar crime since 2011, when it became an offence not to report them.

He said the bureau was receiving such a volume of complaints that it was struggling to process many of them.

Of those cases that gardaí had the time to consider, just one in 10 actually resulted in a prosecution, he added.

In recent months, Ian Drennan of the ODCE has said he would need at least five forensic accountants to make the office “credible”. He has also said that resource-intensive investigations into Anglo Irish Bank have had an inevitable impact on current detection work.

“So there is now one forensic accountant working in the principal law enforcement regulatory body in this country,” Mr Farrell said, adding: “It’s enough to make the tin-pot dictator of a banana republic blush.”

On the severe delays in forensic computer analysis due to under-resourcing, which were having a “stark” impact on investigations, Mr Farrell said: “So if you’re going to commit an elaborate fraud, make sure to password lock your computer, even if it’s a really obvious password. That should buy you at least two to three years.”

The barrister said one of the “stock responses” from successive ministers in recent years was to increase the penalties for regulatory offences, which was attractive to politicians but “absolutely irrelevant” if offences were not being prosecuted.

“One of the clearest lessons of the criminal justice system generally is that if you want to stop people committing offences, it has very little to do with the penalty. It’s actually to do with the likelihood of getting caught.”

More broadly, overall funding for the Director of Public Prosecution’s office has declined by 25 per cent in recent years to €19 million in 2012 – substantially less than the €47 million spent by the Health Service Executive on external legal fees.

“The truth is that under-resourcing for regulatory bodies in this country is now endemic,” Mr Farrell said.

“Now is the perfect time to commit regulatory white-collar offences.”