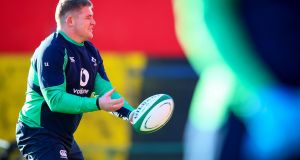 Tadhg Furlong could be fit for the start of Ireland’s Six Nations campaign. Photograph: Tommy Dickson/Inpho

Andy Farrell is optimistic that a clutch of players coming back from injury, namely Tadhg Furlong, James Lowe, Iain Henderson and Johnny Sexton, will be fit for Ireland’s opening 2021 Six Nations game away to Wales next Sunday week.

Furlong hasn’t played since the defeat by England last year due to a variety of issues, namely back, hamstring and latterly calf, but the Lions Test tighthead has been earmarked for a comeback with Leinster against the Scarlets this Saturday.

“Speaking to Tadhg yesterday, he had a great day, he was feeling good, fit and strong, meeting all the requirements, hitting great markers etc.

“He feels in good spirits so hopefully we get him through to the end of the week and get some minutes under his belt for Leinster, if selected, and then the plan would be all going well that he’ll come back into camp on Sunday with us and gets a full week’s lead-in.”

Similarly, Farrell said Lowe was also progressing well, along with the others who have recently returned to action or are about to do so.

“Hopefully come the weekend the news is going to be good on that front and we’ll have a straightforward week into Wales.”

Sexton himself is confident he’ll be back training well in time to lead the team out against Wales after going off with a “very frustrating” hamstring strain in Leinster’s win over Thomond Park last Saturday.

“I was in a good place before the Munster game and picked up a niggle, so I won’t let it get me down too much.”

Sexton spoke of his honour and privilege at being re-appointed captain adding: “I’ve learned a lot over my first year doing it and hopefully I’ll be better for it going into this campaign.”

Currently negotiating a new contract with the IRFU and Leinster, needless to say, the fire still burns, not least for this Six Nations campaign.

“I don’t like to throw your goals out for everyone to hear them, but obviously being captain for this campaign, (I have) big aspirations that the team does really well to try and win a championship, which as captain would be brilliant.

“Look, there’s lots of stuff. For me, it’s about taking it one campaign at a time. I’m just properly focused on this one and whether I stay on for another year or another two, I don’t know. Hopefully I’ll have something sorted in the next few weeks and like I said, all my focus is on this campaign and trying to win it, trying to do a good job as captain and make sure we’re better as a team off the back of it.

“Like I said, I’m so excited to get into camp, it was a great place to be in November and now hopefully we can keep it like that but have a couple of extra results go our way, and to win some silverware is where we want to be at the end of this tournament.”

He has a new addition to the three Irish scrumhalves in the squad in the uncapped 21-year-old Craig Casey, who was in the camp for a week during the Autumn Nations Cup.

“He was incredibly impressive in his work in practice, his attitude, the way he lives his life is just geared towards being the best he can be and being the best rugby player he can be and it’s admirable. That rubs off on other guys, and even the Munster guys have said how a big an impact he’s had on the environment down there.

“It’s great that we have so many good 9s throughout the country now pushing each other. At one stage everyone was wondering what happens if something happens to Conor and now there’s so many guys pushing him and he’s still maintaining his high standards, so it’s a great place to be.”

Another ‘newcomer’ when the squad assembles in Carton House this evening before starting their preparations in the HPC on Thursday is Paul O’Connell, whom Farrell worked with on the 2013 Lions tour.

“Myself and Paul have a good rugby relationship for many years now. He is someone who I keep in touch with on a regular occasion. We have had him in camp a couple of times and I have always been interested in what his thoughts are and what his next steps are etc.

“I suppose conversations just keep on having over a period of time, and yeah, the timing is right for now for Paul to come into camp and get ready for this Six Nations.”

Farrell also expressed the hope that, “fingers crossed”, Jacob Stockdale will have recovered from bone bruising on his knee to be available “midway through the competition” and that the opening two rounds had “come a bit early” for Dan Leavy.

“He was a long old time off and it obviously takes time for guys with an injury of that magnitude to feel his way back into it. I’m sure Dan will do that in the next period of time.”

In an overall contest, Farrell said that Ireland aspired to be among the two favourites, England and France, and that they were not far away from being in that category.

“Not far at all. We made a couple of comments at the end of the autumn about how we know where we are going and we know how far we are from being there. We thought we made good strides and we are nearly where we want to be but this is it now, this is the Six Nations, a fantastic competition and it is there to be won by a number of teams.

“To do that there are couple of things we need to keep getting better at. You have to get through your first and second games to assess where you are at before you start talking about the last game, which is where we want to be, to compete to win a competition. We’re a side that had developed in many ways but it is putting all the pieces together and culminating in a performance that we are proud of internally as well.”