Six Nations 2021: The only way is up for Wayne Pivac and Wales 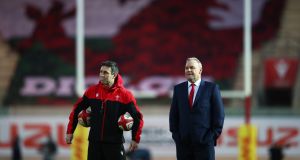 Wales headed into the 2020 Six Nations as defending Grand Slam champions and having come agonisingly close to a place in a maiden World Cup final just a few months earlier in Japan. Like Ireland they were under new management, with Wayne Pivac replacing Warren Gatland after 13 golden years at the helm. And on paper, Pivac’s first year in charge was a bit of a disaster. Wales played 10 Test matches in 2020 and could only manage three wins - two against Italy and one against Georgia. As difficult as the Gatland succession was likely to be, this was an alarming drop-off from the glory of 2019 - however, there were a few caveats.

Pivac had a number of frontline injuries to deal with in 2020, while you could argue the lack of supporters at games has hindered Wales more than anybody else. Their home fixtures post-restart were held at an empty Parc Y Scarlets - a far less intimidating proposition for visiting sides than a packed crowd under the Millennium Stadium roof. Wales will be back in Cardiff for this year’s Championship, and while games will be still played behind closed doors it is hard not to see them vastly improving.

Hooker Ken Owens is back in the saddle after returning from a long-term injury. So too is Josh Navidi, and he could form a powerful backrow with Justin Tipuric and Taulupe Faletau. Pivac has some key selection calls to make, with a resurgent George North vying with Josh Adams and Louis Rees-Zammit for a place on the wing, although Liam Williams misses their opening fixure against Ireland. Dan Biggar remains the automatic choice at outhalf with Gareth Anscombe still on the comeback trail, with Rhys Webb an eye-catching omission.

Wales look set for a much better showing in this year’s Championship, and can set the tone for the rest of the year when they play Ireland on the opening weekend. For both sides, that fixture could define their campaigns.

Wayne Pivac’s Wales honeymoon didn’t last long - victories over the Barbarians and Italy in his first two Test matches were followed by a run of six-consecutive defeats. It was always going to take time for Pivac to implement his brand of attacking rugby after 13 years of Warren Gatland, and this will have been harder to achieve given the stop-start nature of 2020. So while last year’s results were disappointing they should be taken with a pinch of salt - particularly those post-restart.

A former policeman, Pivac has been resolute in the face of criticism but it is hard to envisage him surviving a similar campaign this year - a slow start in the Six Nations could quickly see the Welsh rugby public turn against him. But for now, he will know a statement victory could be the catalyst needed to turn Wales back into Championship contenders - and where better to start than against Ireland?

Here we go again. Alun Wyn Jones is heading into a staggering 16th Six Nations Championship, while remaining one of the most influential forwards in world rugby. Last year was a disappointing one on the pitch for Wales but it saw Jones pass a significant milestone, as he overtook Richie McCaw to become the most capped player in Test history - he now has 152 in total. But personal accolades will mean nothing to the 35-year-old if Wales aren’t winning Test matches. The mighty lock remains the beating heart of the Welsh pack, driving the highest of standards and leading by example.

He will be pleased to see the return of Ken Owens at hooker, which should significantly improve the Welsh set-piece, although there are question marks over who will get to join him in the engine room. Maro Itoje and James Ryan are at the opposite end of their careers, but both will have a job on their hands to dislodge Jones from the Lions secondrow should this summer’s Lions tour to South Africa go ahead. The Welsh captain won’t have many Six Nations left, and he’ll be determined not to see another campaign go to waste.

While a lot of Pivac’s selections are fairly straightforward, he has a dilemma coming up when it comes to the Welsh back three. Liam Williams’ suspension clears the way for a resurgent Leigh Halfpenny to take the number 15 jersey for now - a decision which won’t be as clear cut when both are available. On the wings Josh Adams is very tough to drop despite a run of seven Test matches without a try, while George North’s fine recent performances for the Ospreys make him hard to ignore.

However, 19-year-old Louis Rees-Zammit (he turns 20 on February 2nd) could prove to be the ace in the Welsh backline. The Gloucester flyer can run 100m in a shade over 10 seconds and looks ready to transfer his try-scoring exploits from the Premiership to the Test arena. Already being talked about as a potential Lions bolter, he looks sure to add to his four Wales caps over the coming weeks.

A fast start is key for Wales, as they bid to kick the hangover from last year. To go from fifth in the Championship to winning the title would be a big ask, but if they can start with wins over Ireland and Scotland then they will have the wind in their sails. It’s a big ask but if momentum could carry them past England in Cardiff on the tournament’s middle weekend, then they could be travelling to Paris with the title on the line.