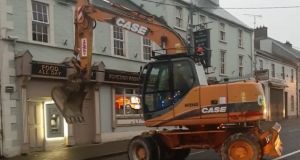 A group of men based across four counties who have links to the republican movement are under investigation for a series of ATM robberies, including a foiled raid in Virginia, Co Cavan, last week.

Three suspected members of the gang were arrested in Co Meath on Tuesday and another €100,000 was found, bringing to €400,000 the amount seized from the group over the past week.

One of these men, a 25-year-old, was released without charge on Thursday morning. A file has been sent to the DPP.

Two other men in their 30s remain in custody at Kells Garda station.

All of the money is believed to be the proceeds of ATM robberies, including a double raid in Kells, Co Meath, earlier this year when ATMs were ripped from the walls of two different banks and driven away.

The man found with the money during the Garda search on Tuesday night was one of three men arrested last week after the foiled Virginia robbery. He had been released without charge after his arrest last week pending further investigation.

He was still being questioned on Wednesday.

The gang, the nucleus of which is compromised of men who are related to each other, have addresses in Cos Meath, Cavan, Armagh and Down.

A digger was stolen in the early hours of Wednesday of last week from a local building site in Virginia and driven to the front of the Riverfront Hotel on the town’s main street.

Gardaí had intelligence on the gang and were waiting nearby ready to move in when the ATM robbery commenced. However, just as the men put the stolen digger into position and were about to pull the ATM from the hotel wall, they stopped and fled.

One of the suspects was arrested at the scene and another man was detained hiding in the toilets of the hotel several hours later. Another third man, who is middle aged, was detained at a search of a premises in Co Meath, where €300,000 was found.

Of the three suspects arrested last week, two have been released without charge through man remained in custody on Wednesday.

A further three arrests were made in Co Meath on Tuesday night when a further €100,000 in cash was found.

The total €400,000 seized to date is believed to be from two ATM robberies in Kells, Co Meath, that occurred without minutes of each other back in April.

In Kells, a gang used a digger to rip the cash machine from the wall of the town’s AIB shortly after 4am on Friday, April 19th, and then removed the ATM from the wall outside the nearby Bank of Ireland. The gang also deployed spikes to try and frustrate any Garda response.

The cash machines were driven away on the back of a dark-coloured SUV. The €400,000 now seized is believed to be from the two Kells robberies and at least one other ATM theft.

A Garda spokesman said further searches were carried out in Co Meath on Tuesday evening by units investigating the gang’s activities.

“A further significant quantity of cash (amount to be confirmed) has been recovered,” the spokesman said on Wednesday.

Two men in their 30s, one with an address in Northern Ireland, were arrested under the Criminal Justice Act 2006 and taken to Kells Garda station. Another man (28) was arrested on suspicion of money laundering offences and was being held at Navan Garda station.