Scale of bicycle theft in Dublin ‘putting people off’ cycling 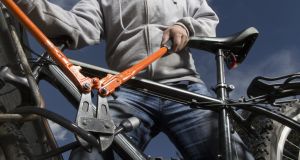 ‘It is striking that only a tiny percentage is recovered – bikes are expensive enough items for individuals and families to pay out on.’ Photograph: iStock

The scale of bicycle thefts in Dublin has been condemned as “unacceptable” as latest official figures show almost 4,000 were reported stolen last year, a rate of more than 10 every day.

Campaigners say the true figure is much higher, with only a tiny percentage of stolen bikes ever recovered, and that the problem is putting people off cycling in the capital.

In response to a parliamentary question by Independent TD Tommy Broughan, gardaí said 3,929 bike thefts were reported in Dublin last year. Of these, just 286 – about 7 per cent – were recovered.

Some 70 per cent of reported bike thefts in Ireland occur in the capital, with the average value of a bicycle €510.

“I think it is appalling,” he said. “I was prompted to ask for the figures because of an upsurge in bike theft in some of the new estates in north Dublin, where younger householders particularly are increasingly reporting the problem.

“It is striking that only a tiny percentage is recovered – bikes are expensive enough items for individuals and families to pay out on.”

Some 70 per cent of reported bike thefts in Ireland occur in the capital, with the average value of a bicycle €510.

David Timoney of the Dublin Cycling Campaign said that although it was “probably a good thing” that official figures were decreasing, there was “a significant under-reporting” of bike theft.

“The true number of stolen bikes is around three times the reported figure, according to findings by the Central Statistic Office, through its crime and victimisation surveys,” he said.

That would translate into 12,000 bicycles being stolen every year in the capital, or more than 30 a day.

Mr Timoney, who has carried out research into bike theft in Dublin, said the scale of the problem is “broadly similar” to other European cities but that it could be driven down if better bike racks were installed.

“The finger of blame needs to be pointed at the planners in the council, because they don’t insist on proper-quality bike racks. It is a quite simple solution.”

Mr Timoney says his research shows that a “big problem” with bike theft is that one in six victims did not buy another bicycle.

“It is reducing the number of people cycling in the city,” he said. “Some people just don’t persist – perhaps they were trying out cycling again after a long period away from it, and they get their bike stolen.

While the problem is primarily about prevention, he suggested gardaí could do more to target the gangs trading in stolen bikes.

“There is some anecdotal evidence that high-end bikes – where people may be spending €2,000 through the cycle-to-work scheme – are being shipped out of the country very quickly,” he said. “But the data isn’t good on it.”

Analysis released by the Garda last year shows one-third of stolen bikes were taken from the owners’ homes while more than half (53 per cent) were stolen on the street.

More bikes are stolen on a Friday than any other day of the week.

‘I DIDN’T EXPECT TO GET IT BACK’

“To be honest I was quite upset about it ... It was my favourite possession,” says Ken Reid about finding his old touring bicycle stolen one evening recently.

An hour and a half earlier, he had locked it to a sturdy metal stand on Library Road in Dún Laoghaire, a short distance from the restaurant he was having dinner in with his family.

“I bought it second hand about 15 years ago and I use it mostly for commuting. I was very attached to it,” he says.

“I had a decent lock; I spent about €30 on it. I’d say it was prised off with a steel bar or something like that. I didn’t expect to get it back.”

Nonetheless he reported his 25-year-old Dawes Super Galaxy stolen to local gardaí and over the coming weeks kept an eye on online classsifieds sites like Adverts and Done Deal.

“By chance, on Done Deal, I came across it,” he says. “I could tell straight away it was mine – its particular design, the minor damage on the frame and a couple of components I had put on it. There was a phone number for the vendor. He was based in Wexford.”

“They were very helpful from the start,” he says. “Basically we agreed for me to contact the vendor, pose as a potential buyer and meet him on St Patrick’s Day.

“I met up with two detectives who were there to intercept the man where I was to meet him, at a garage in a public place. He said he bought it in a market somewhere.”

When Reid told gardaí that the original wheels and Brooks leather saddle had been removed from the bike, they recovered the same from the man’s house.

“What I would say is that the gardaí were excellent,” he said. “I really appreciate them taking a bike theft seriously. I was super pleased to get it back.”