Public to be banned from tweeting and texting in court

Use of social media will be limited in court to ‘bona fide journalists’ and lawyers, says Chief Justice 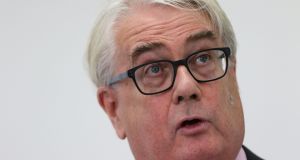 Only “bona fide journalists” and lawyers may report, message or tweet live from court cases, the Chief Justice has directed.

The new practice direction, effective from November 26th, applies to all courts and is aimed at ensuring a fair trial.

The Chief Justice, Mr Justice Frank Clarke, said the potential for unregulated social media to impact on the fairness of the trial process itself “is a legitimate and particular concern of the judiciary”.

The courts’ concern is “to ensure integrity of the trial process and maintenance of a fair trial system”.

He was addressing a seminar of journalists in Dublin, organised by the National Union of Journalists (NUJ) and the Courts Service, on the impact of social media on journalists and access to court documents.

The practice direction arises from what the Chief justice described as “widespread and real” concerns about the difficulties some use of that is having on court cases.

The concerns include comment by observers, while a trial is ongoing, about guilt or innocence of an accused and truthfulness of evidence.

The Chief Justice noted “outrageous accusations” were made by an online journalist during a high profile murder trial and that man had to be threatened with jail to make him remove those.

Another example was the reporting of evidence later ruled by a judge to be non-reportable and rallying people from inside the courtroom with a view to affect a jury’s outlook.

The need is to ensure a balance between open courts and a fair trial, he said.

Despite the great good social media brings to many areas of life and society, false claims can target the individual to the detriment of their reputation, health, and or even existence, he said.

“Online lies and bullying can and have led to death for some.” There are “genuine concerns over the dissemination of false and malicious claims – which damage social debate, learning, and understanding”.

Such false claims “can come just as much from the organised and powerful as from the single contrarian in a basement or a ‘hobby journalist’ in a court room”. There are “dedicated and organised attempts at damaging others, from both those with an interest in maintaining the status quo and those who seek to disrupt power”.

Social media is all pervasive in society and is both “a democratisation of influence” and “a challenge to democracy if anyone seeks to own or control much of social media as the new public sphere”. All of this underlined a “clear” need for guidelines regarding the ‘who, when and what’ of using social media in courtrooms.

The practice direction will limit use of court based data messaging and electronic devices, to bona fide members of the press, as the eyes and ears of the public, and bona fide lawyers with business in the courts, he said.

It means any digital, text based, mass communication from a courtroom will be entrusted to those “who sign up to ethical means of communication, to principles and codes of conduct: to those who know what can be said and when”.

“Others in court will be unable to text or message from the courtroom – in any form,” he stressed.

Anyone who breaches the direction may face sanctions including being ordered to leave the court and surrender their device temporarily.

While the courts have to date rarely had to use contempt of court laws to curb inaccurate and disruptive online communications about cases, it would be “extremely naïve of us not to plan for the future in this regard”, the Chief Justice said.

The print and broadcast media have, he noted, given “very little cause for concern” in how they report and comment on court cases as they generally do so “honestly, diligently and with great skill” and restraint.

If the experience of the operation of the practice direction provides evidence it needs to be reinforced by new legislation, judges will ask for that to be considered.

Noting the Law Reform Commission is examining reform of the law concerning contempt of court and the extent of privilege attached to reporting of court cases, he said those should be addressed to take cognisance of the new reality of instant communication.

The impact of any changes needs to be discussed with the legal professions, the Director of Public Prosecutions, the Chief State Solicitor and An Garda Síochána, he added.

Ray Byrne, of the Law Reform Commission, said the expectation that court reporters should do “real time” reporting poses enormous challenges and the priority was to ensure court reporting remained accurate.

The issues being examined by the Commission include the extent of the privilege that should apply to court reports, he said.

Earlier, Seamus Dooley of the NUJ said court reporting “cannot be done safely in a series of tweets produced under pressure” with no access to editorial judgment or oversight. If court coverage is required to adjust to keep pace with social media, that poses a threat both to the credibility of the media and the administration of justice, he said.