Gerry Adams gets permission to appeal convictions from 1970s 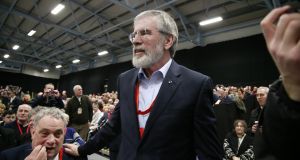 Sinn Féin’s Gerry Adams has been given the go-ahead to challenge two historic prison escape convictions at the UK’s highest court.

The former Sinn Féin president claims two convictions received in 1975, relating to attempts to escape from the Maze Prison during the early 1970s, are unlawful because of flaws in the detention process.

Lawyers for Mr Adams (70) argue that, because the order used to intern him was not lawful, he should not have been prosecuted for trying to escape from what they assert was unlawful custody.

In February, the Court of Appeal in Belfast rejected Mr Adams’ argument that the interim custody order (ICO) used to detain him had to be personally considered by the secretary of state for Northern Ireland.

But, on Monday, the Supreme Court in London announced that Mr Adams had been granted permission to appeal against that ruling.

The Louth TD was first detained in March 1972, but was released in June that year to take part in secret talks in London.

He was rearrested in July 1973 at a Belfast house and interned at the Maze Prison, also known as Long Kesh internment camp.

Mr Adams is challenging convictions handed down by two separate Diplock Court trials, cases tried by a single judge sitting without a jury, relating to two attempts to escape from internment.

The Court of Appeal heard in February that, on Christmas Eve 1973, he was among four detainees caught attempting to break out of the Maze.

His barrister Sean Doran QC said: “A hole had been cut in the perimeter fence and all four were already through.”

The second escape bid in July 1974 was described as an “elaborate scheme” which involved the kidnap of a man who bore a “striking resemblance” to Mr Adams from a bus stop in west Belfast.

The man was taken to a house where his hair was dyed and he was given a false beard, the court heard.

The man was then taken to the Maze where he was to be substituted for Mr Adams in a visiting hut, however prison staff were alerted to the plan and Mr Adams was arrested in the car park of the jail, the court was told.

Mr Adams was subsequently sentenced to 18 months in jail for attempting to escape.

Mr Doran said that Mr Adams’ detention was unlawful because the ICO was signed by a junior minister at the Northern Ireland Office and not the secretary of state.

But the Court of Appeal said it was “satisfied that the ICO was valid having been made by the minister on behalf of the secretary of state” and dismissed Mr Adams’ appeal.

Internment was introduced in 1971 by former prime minister of Northern Ireland Brian Faulkner for those suspected of involvement in violence. The policy lasted until December 1975.

It is understood Mr Adams instigated legal proceedings after the Pat Finucane Centre recovered a document from the British National Archives in London.

No date for the Supreme Court hearing of Mr Adams’ appeal has been given. - PA