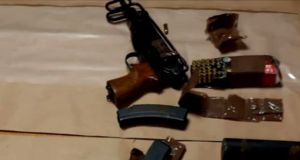 Two machine guns and ammunition were found during a search of a premises in Dublin’s north inner city on Thursday.

A man (48) was arrested in connection with the seizure and is being detained at Mountjoy Garda station.

The search was carried out by the Garda National Drugs and Organised Crime Bureau.

The man is being detained under the provisions of Section 30 of the Offences Against the State Act, 1939/98.

Speaking on Thursday night, Assistant Commissioner John O’Driscoll said: “An Garda Síochána, through Organised and Serious Crime and the Garda National Drugs and Organised Crime Bureau in particular, continues in its unrelenting determination to take lethal firearms off the streets of Ireland in its ongoing efforts to keep people safe.”