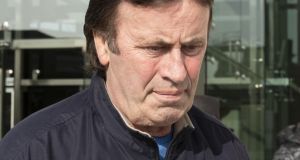 An Irish man has been surrendered to British authorities for failing to pay a decades-old multimillion-pound fine for tax evasion.

Daniel O’Connell (65) spent three years in an English prison in the early 2000s for one of the UK’s biggest ever VAT frauds.

As part of his original sentence, O’Connell was made subject of a £6.3 million confiscation order, which he has not paid, and which has grown to about £13 million at an accumulated interest rate of £1,294 per day.

UK authorities said they had been seeking O’Connell, with addresses at Ballybrack, Clonlara, Co Clare and Roseneath, Corbally, Co Limerick, for several years. He was arrested in Ireland on foot of a European arrest warrant in 2017 and extradition proceedings have been ongoing.

On May 10th, the Supreme Court rejected O’Connell’s latest legal challenge and he was surrendered to UK authorities by detectives from the Garda extradition unit last month.

O’Connell’s six-month trial at Middlesex Guildhall Crown Court in 2000 heard that the then London-based businessman lived a millionaire’s lifestyle and lavished diamonds from royal jewellers upon his mistress.

The fraud involved the purchase of computer chips and other components in London, claiming they were destined for companies in Ireland and would therefore not be liable for UK VAT.

However, O’Connell sold the computer components to his own network of companies in England, pocketing the VAT, some of which he allegedly stashed in offshore bank accounts in the Bahamas, Belize and the Turks and Caicos islands in the Caribbean, his trial heard.

He used the profits to fund a playboy lifestyle, often staying at the Grosvenor House Hotel on Park Lane in London, where he was a member of the Grosvenor Casino Club.

He bought his mistress a £16,000 Cartier watch as well as an Asprey & Garrard ring worth £30,000. He took several holidays a year to destinations such as Monte Carlo and planned on retiring to the Bahamas, his trial heard.

His lavish spending came to an end when he was arrested in a suite at the Grosvenor House Hotel, after a dawn raid by Her Majesty’s Customs and Excise officers in 1999.

Sentencing O’Connell to eight years imprisonment, judge William Rose described the case as “one of the highest, if not the highest, VAT tax fraud ever prosecuted”.

“The fraud in which you played a part was on a totally massive scale and it resulted in a loss to customs, and thus to the public purse, of something in excess of £20 million. I have little doubt that, had you not been apprehended, the frauds would have continued,” the judge told O’Connell.

During the trial, O’Connell claimed he had been blackmailed into a life of crime by former Fine Gael minister and lord mayor of Dublin, Michael Keating.

It was the crown’s case that Keating played a role in the fraud. The former Fine Gael minister was involved with two firms – Irish Semi-Conductors Ltd and Anglo-Irish Merchants Ltd – which were closely linked to O’Connell during the early part of the fraud, the court was told.

Keating, who left Fine Gael to join the Progressive Democrats in 1986, eventually becoming deputy leader, was the minister of state in the Department of Education in 1981 and became lord mayor of Dublin in 1983. He made a €220,000 settlement with the Criminal Assets Bureau in 2003, but maintained the money was not the proceeds of crime.

O’Connell told the High Court in Dublin he could never repay the smallest fraction of the £13 million he owes. He is facing seven years’ imprisonment in the UK in default of paying the fine.

His lawyers argued that he was “indigent” or unable to pay, and that a seven-year sentence on top of his original jail term was disproportionate. He further contended that his proposed extradition was an abuse of process due to delay.

In his extradition battle, O’Connell told the High Court in Dublin that he had returned to Ireland following his release from UK prison on licence, or parole, in 2003 and since that time, he made no secret of his whereabouts.

He said that he had spent a year as a carer for his mother after his wife’s death and that he had been means tested by the Department of Social Welfare for an approved carer’s allowance as he had no means.

O’Connell said he had a new partner and they have a young daughter. He told the High Court they “would not have had this child . . . had he known that she would be left without a father in the State in her formative years because of the failure of the UK authorities to pursue the matter of the confiscation order in a timely fashion”.

In three affidavits, O’Connell claimed that efforts to locate him over the years, if any, had been ineffective. He said he had travelled to the UK a number of times since his release from prison and was “shocked” when he was arrested there in 2016.

He said he developed a heart condition in October 2017 and he referred to a copy of a consultant cardiologist’s report.

He said it would be wholly unjust to put him back in prison nearly 20 years after the original offence, especially since more than half of the £13 million that he is required to pay has been accumulated through interest.

The European arrest warrant issued in respect of O’Connell states that he was made subject of a confiscation order in the sum of £6,258,944.41 shortly before his release from UK prison on licence, or parole, in January 2003. The confiscation order contained a default term of a further seven years’ imprisonment for non-payment. O’Connell was present at the confiscation hearing, the warrant states.

To date £353,407.41 has been paid towards O’Connell’s confiscation order. This money originated in two bank accounts linked to O’Connell, according to the warrant.