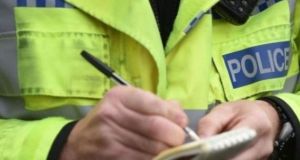 The Police Service of Northern Ireland (PSNI) said it was working to establish a motive for the attack. File photograph: PA

Police in the North are investigating the petrol bombing of a house in Co Tyrone.

A woman, one of two people in the house in Cookstown at the time, said she heard a loud bang and saw flames at a front window at around 9:50pm on Saturday.

When she went to the front of the house in the Crossglebe area of the town, she saw a masked man standing next to a car parked outside.

The masked man dropped a bottle he had been holding and ran off, the woman told investigators.

Both people who were inside the house at the time were uninjured.

The Police Service of Northern Ireland (PSNI) said it was working to establish a motive for the attack and would like to hear from anyone with information.

“They are particularly keen to hear from anyone who was in the area and who have seen a male fleeing the scene,” a PSNI spokesman said.