Drugs worth more than €31,000 seized in Dublin and two arrested 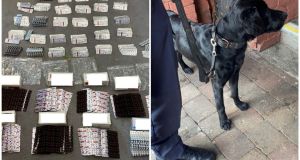 An image of some of the drugs seized and Garda Dog Mack. Photograph: An Garda Síochána

Gardaí have seized drugs worth in excess of €31,000 and arrested two men following a search operation in Dublin 8 on Saturday. As part of ongoing investigations into the sale and local distribution of illegal drugs, gardaí carried out a searches in a number of flats in the Basin Street area of Dublin 8.

During the course of the searches controlled drugs, including cocaine and benzodiazepine, with an estimated street value of €31,000, pending analysis, were discovered.

Two men aged in their 60s and 20s have been arrested and are currently detained at Kevin Street Garda Station under Section 2 of the Criminal Justice (Drug Trafficking) Act, 1996. They can be held for up to seven days.

The operation was carried out by members of the Kevin Street Serious Crime Unit, Divisional Drug Unit, Task force and local units from Kilmainham with assistance from the Dog unit.

The investigation is ongoing.